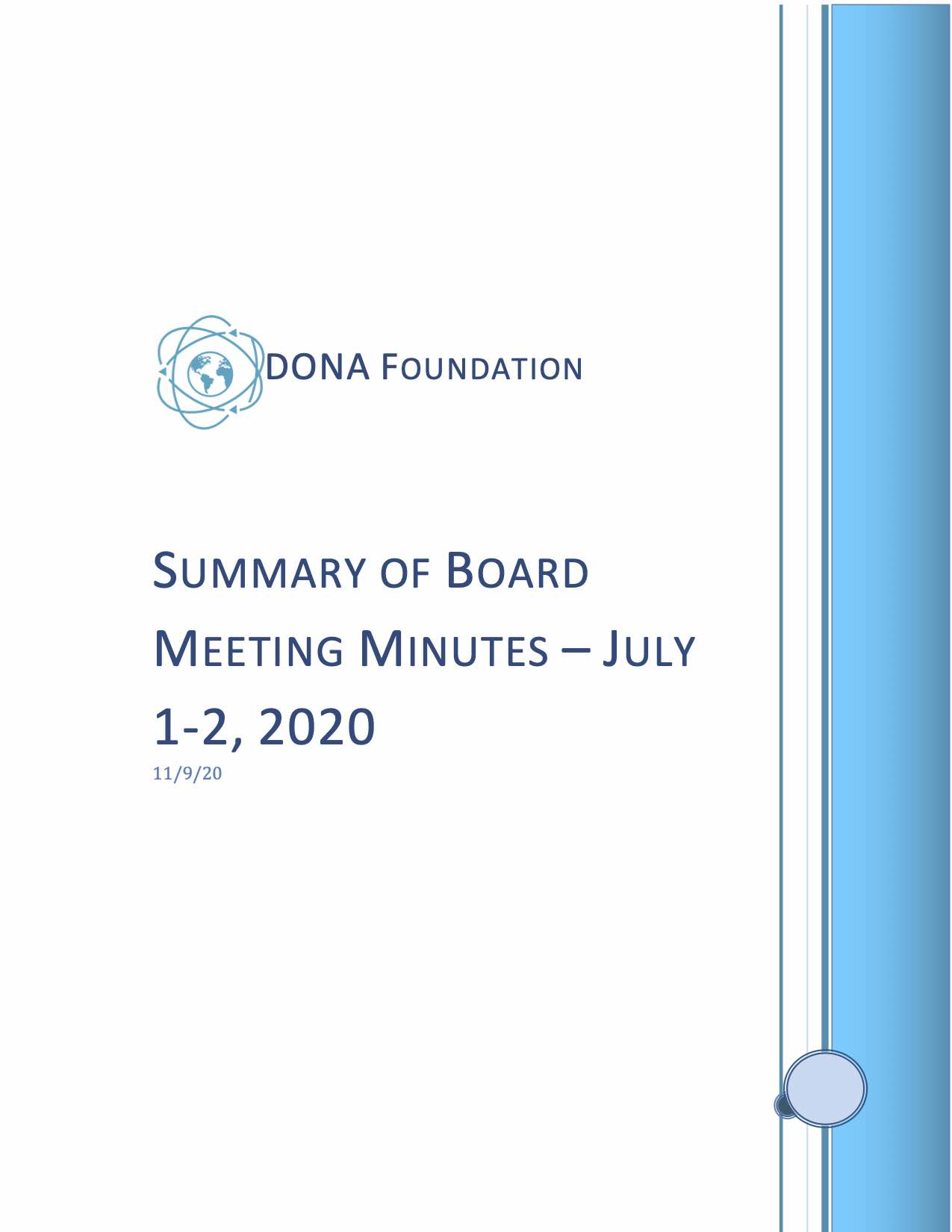 Due to the COVID-19 situation, the Annual Meeting 2020 was held as a virtual meeting by videoconference.

Also present (by videoconference): Alexander Ntoko, institutional representative of ITU; Patrice Lyons, institutional representative of CNRI; and the DONA Foundation's Executive Director, Christophe Blanchi.  In addition, guests who had participated in the DONA Coordination Group (DONA-CG) meeting, held on June 29 and 30, 2020, were present for most of the Open Sessions of the Board meeting at the invitation of the Chair.

The DONA Foundation is pleased to announce version 2.0.0 of the DOIP protocol implementation. 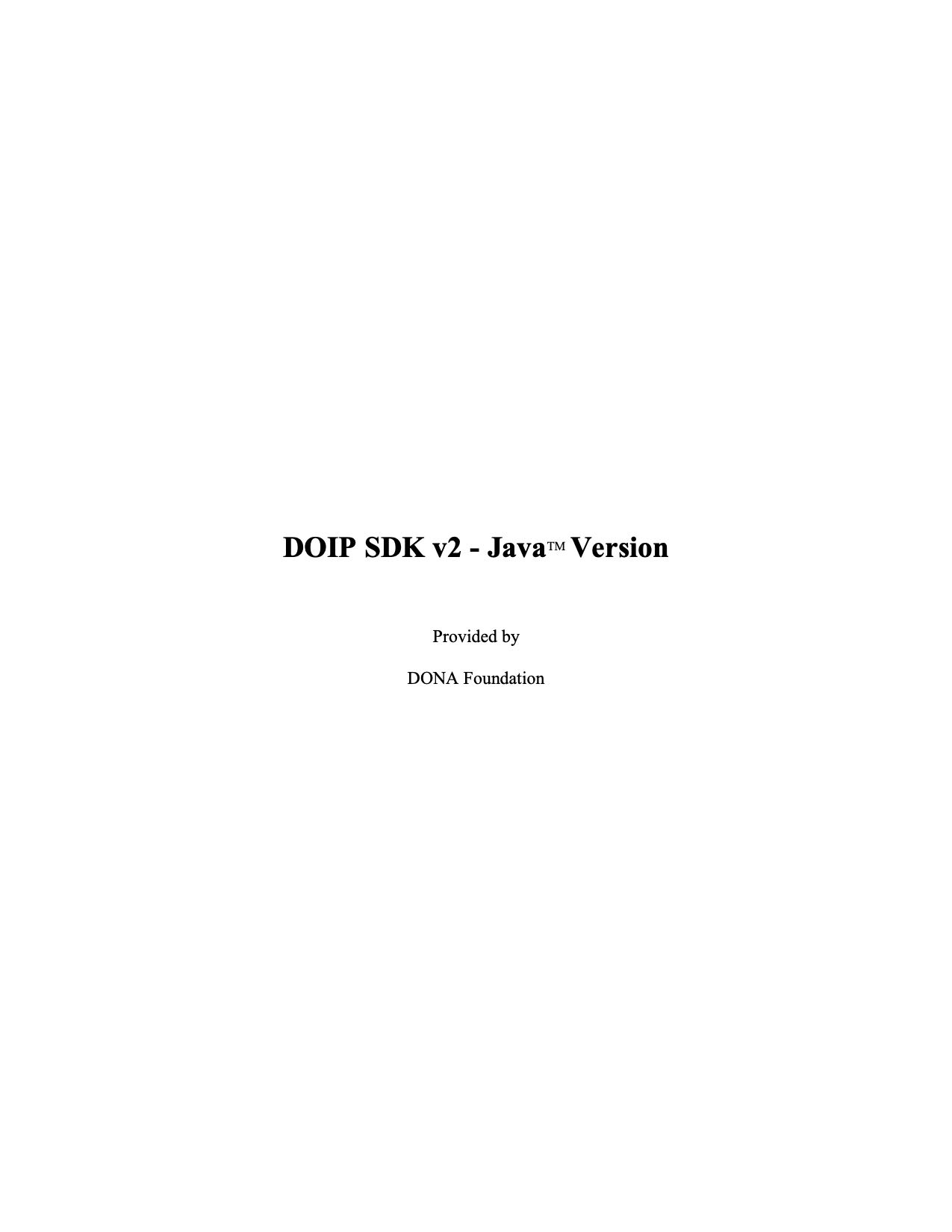 The DOIP Software Development Kit version 2 is intended to be used by Java developers to associate a DOIP version 2 interface to their system of choice. DOIP interface might be associated with Data Repositories and Metadata Registries, among other information systems.

The DONA Foundation is pleased to announce version 2.1.0 of the DOIP protocol implementation. 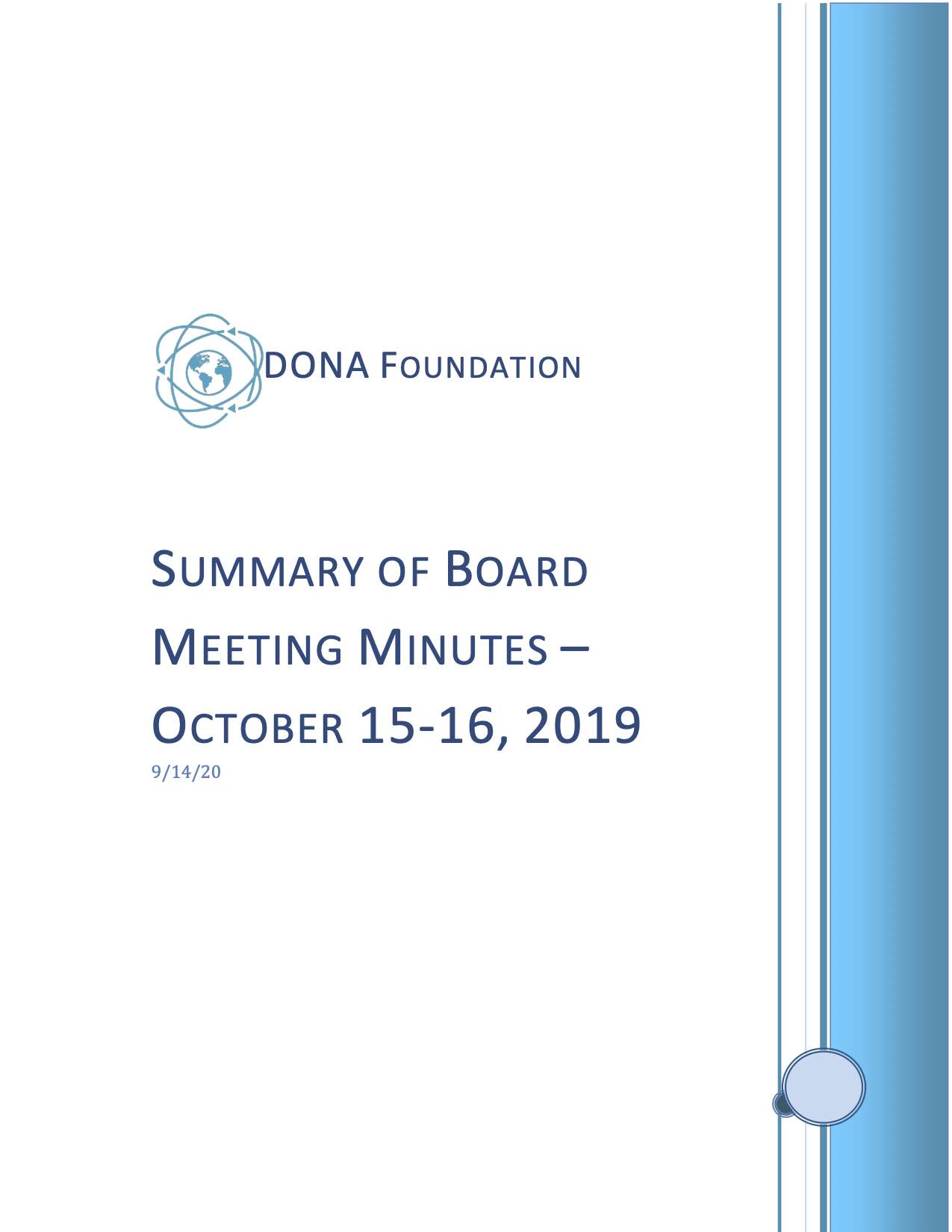 Also Present: Alexander Ntoko, institutional representative of ITU; Patrice Lyons, institutional representative of CNRI; the DONA Foundation’s Executive Director, Christophe Blanchi. In addition, guests who had participated in the DONA Coordination Group meeting held from October 13 to 15, 2019, were present for most of the Open Sessions of the Board meeting at the invitation of the Chair. 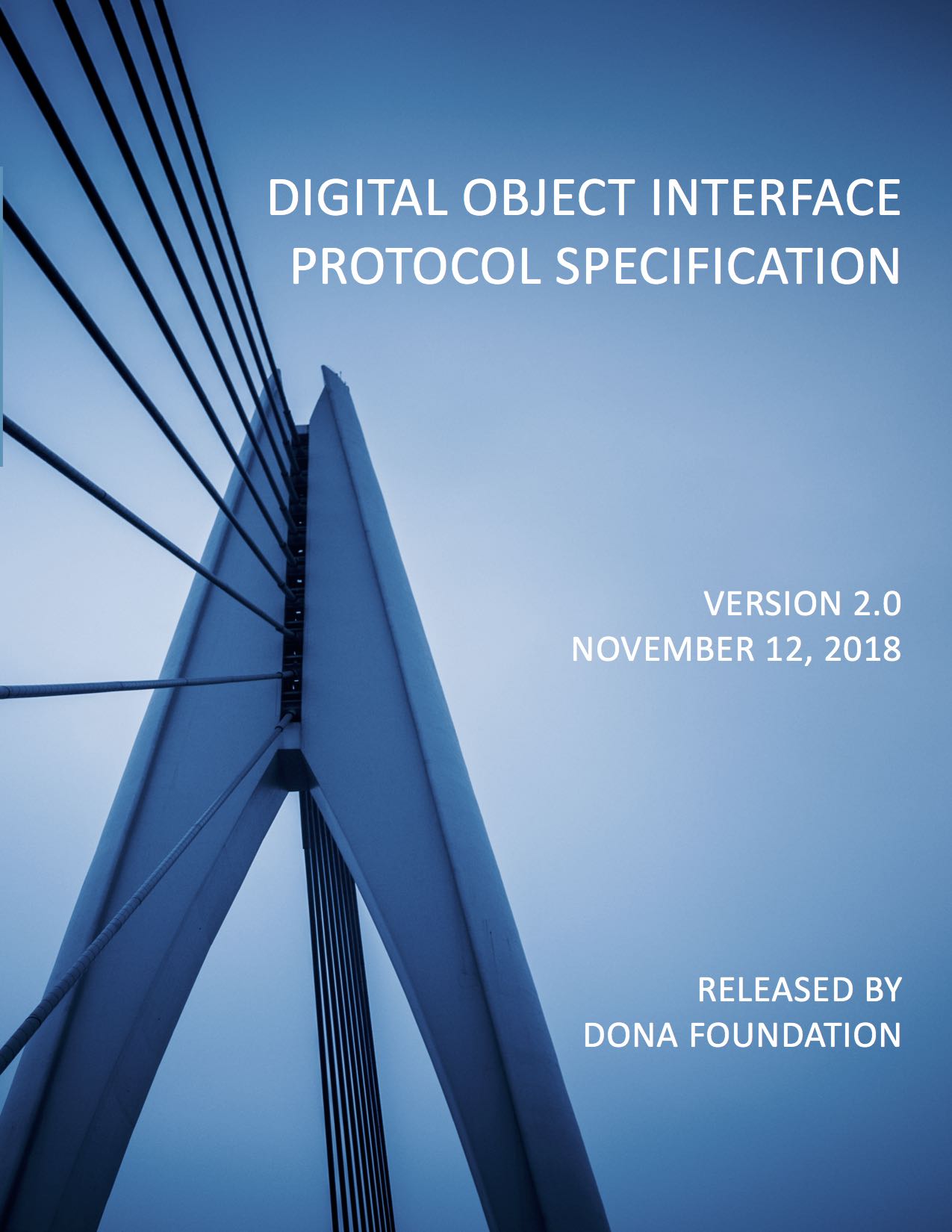 The Digital Object Interface Protocol (DOIP) version 2.0 specifies a standard way for clients to interact with digital objects (DOs). It is assumed that such DOs are managed by DO Services, which we often refer to as DOIP services in this document, and that the protocol implementation is part of those services. In this context, a DOIP service itself is considered a digital object. By its very nature, a protocol is intended for enabling interaction between one or more other entities running the protocol and thus, in general, to support a specific form of process-to-process interaction in a network environment. 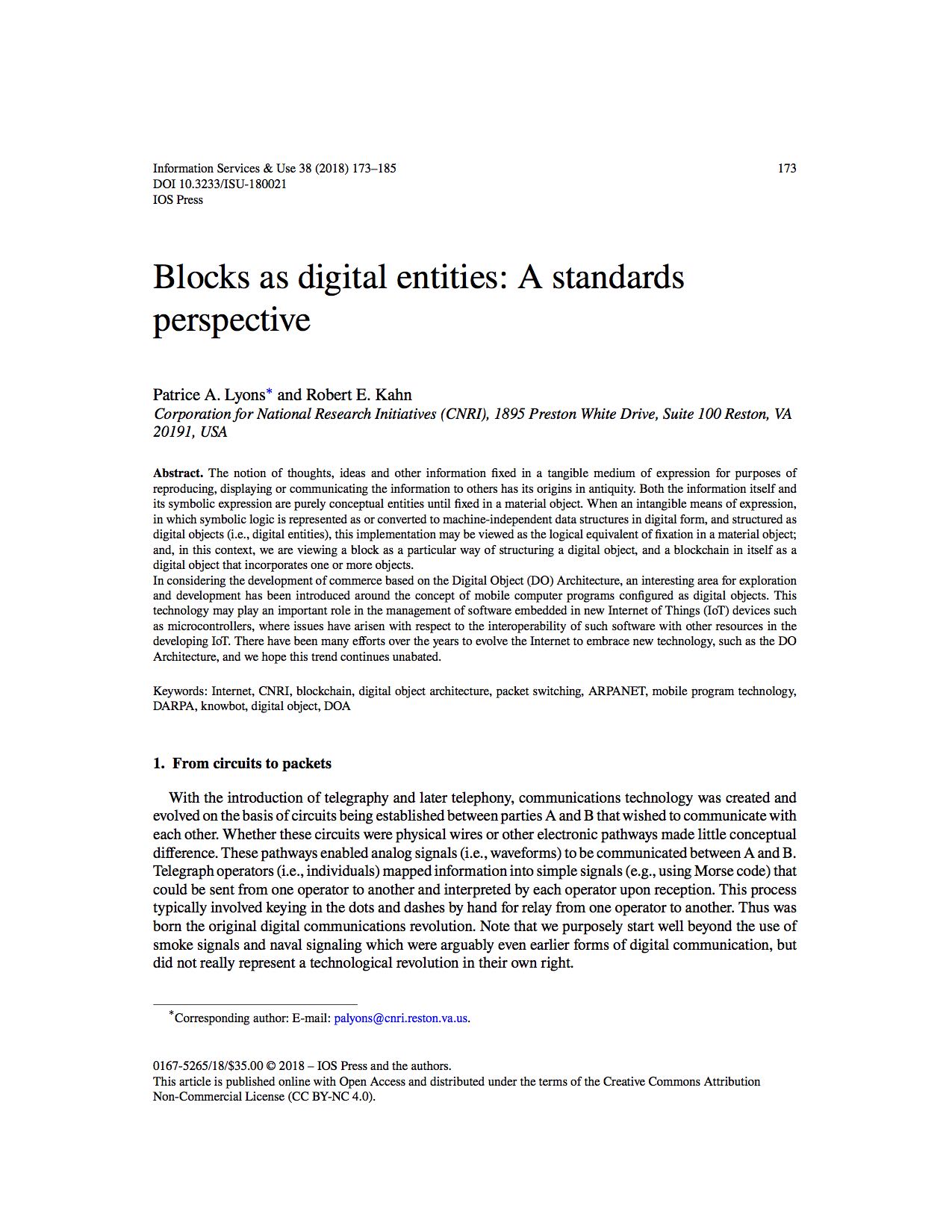 The notion of thoughts, ideas and other information fixed in a tangible medium of expression for purposes of reproducing, displaying or communicating the information to others has its origins in antiquity. Both the information itself and its symbolic expression are purely conceptual entities until fixed in a material object. When an intangible means of expression, in which symbolic logic is represented as or converted to machine-independent data structures in digital form, and structured as digital objects (i.e., digital entities), this implementation may be viewed as the logical equivalent of fixation in a material object; and, in this context, we are viewing a block as a particular way of structuring a digital object, and a blockchain in itself as a digital object that incorporates one or more objects. 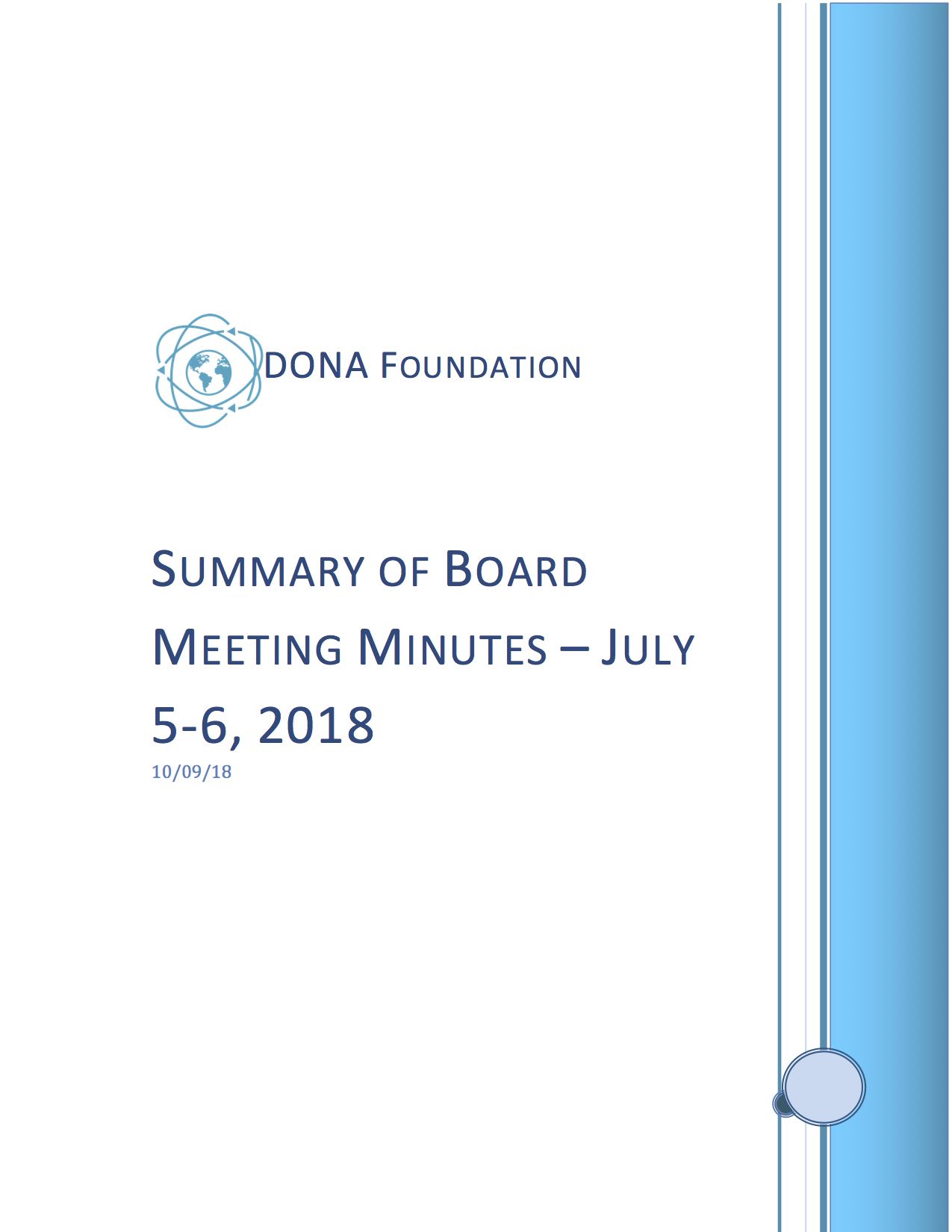 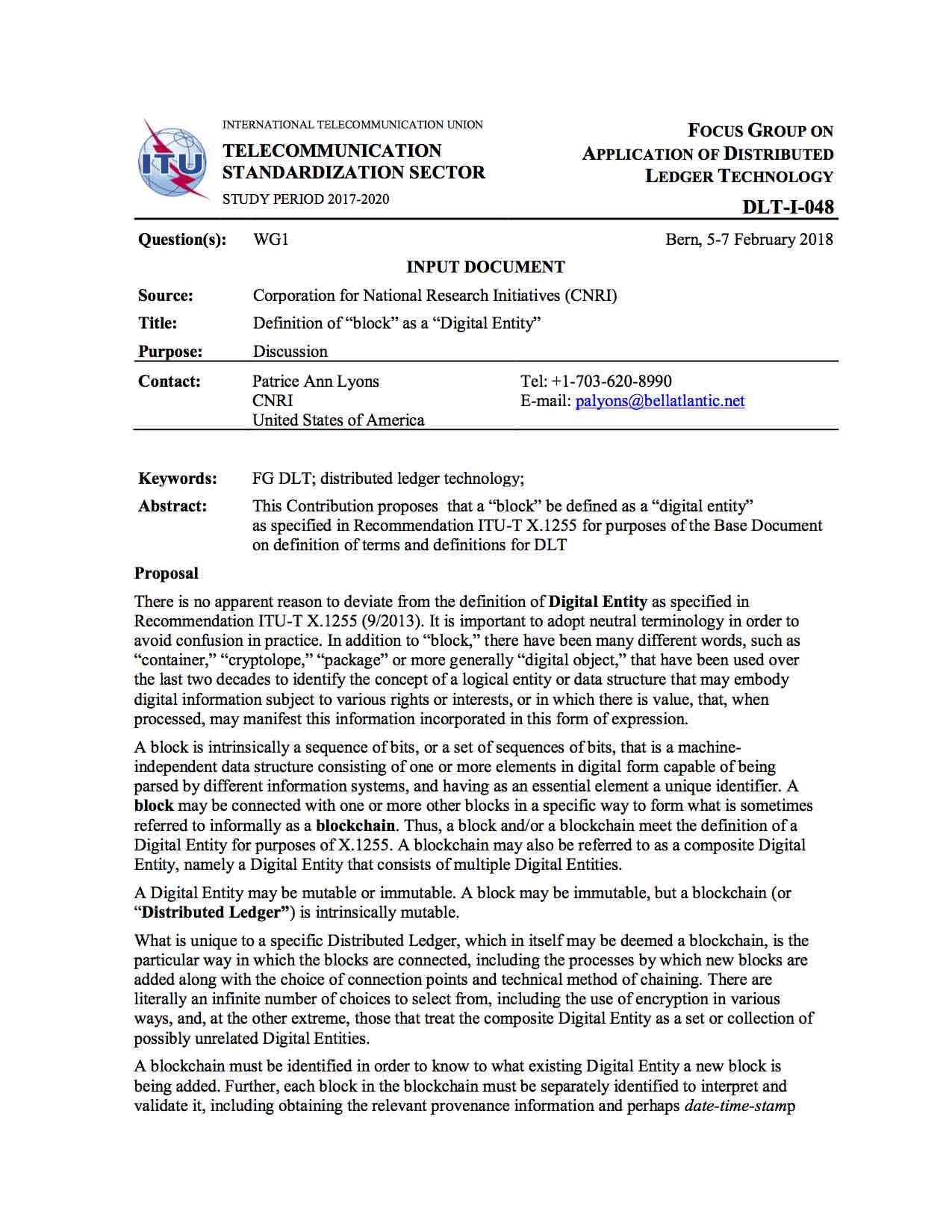 Definition of ‘block’ as a ‘Digital Entity

There is no apparent reason to deviate from the definition of Digital Entity as specified in Recommendation ITU-T X.1255 (9/2013). It is important to adopt neutral terminology in order to avoid confusion in practice. In addition to “block,” there have been many different words, such as “container,” “cryptolope,” “package” or more generally “digital object,” that have been used over the last two decades to identify the concept of a logical entity or data structure that may embody digital information subject to various rights or interests, or in which there is value, that, when processed, may manifest this information incorporated in this form of expression. 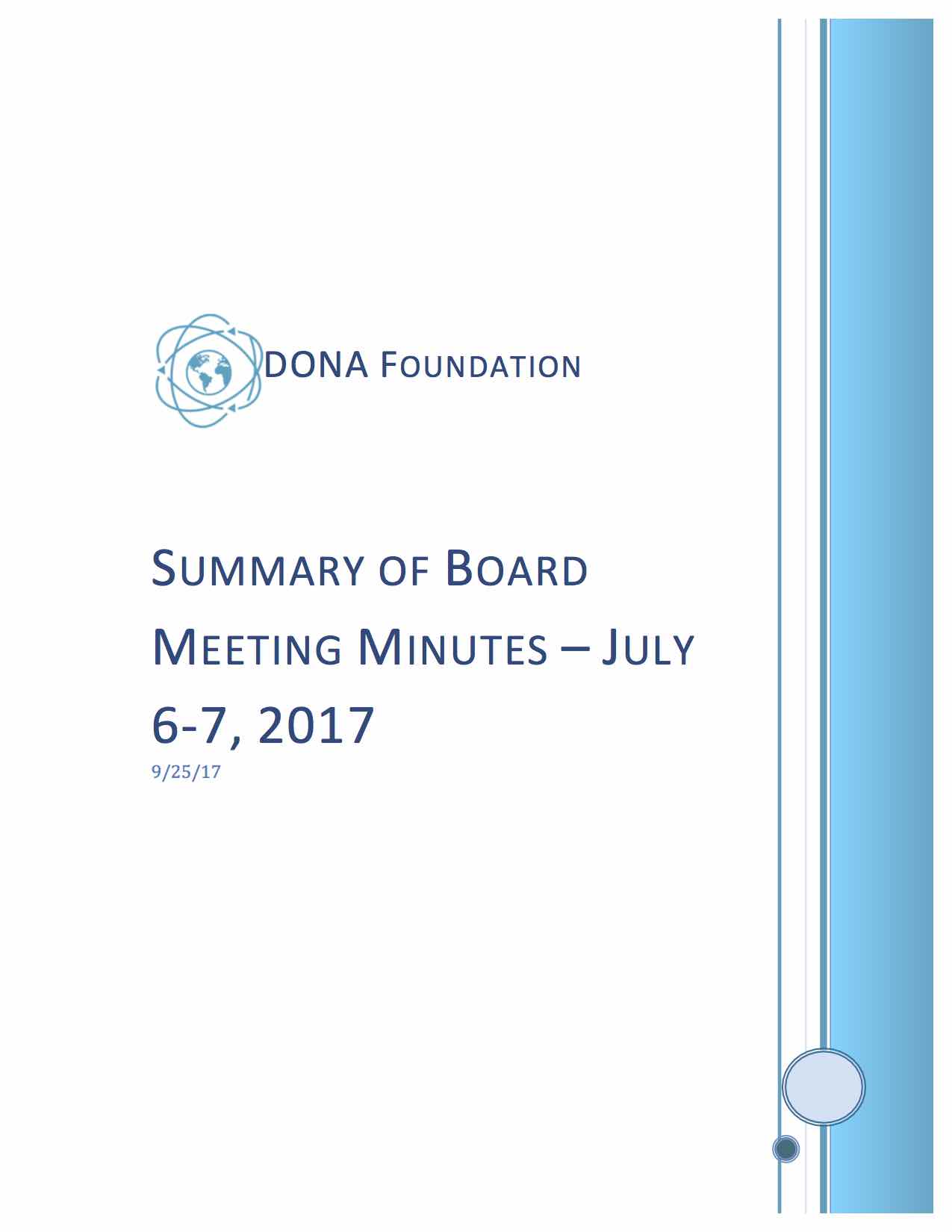 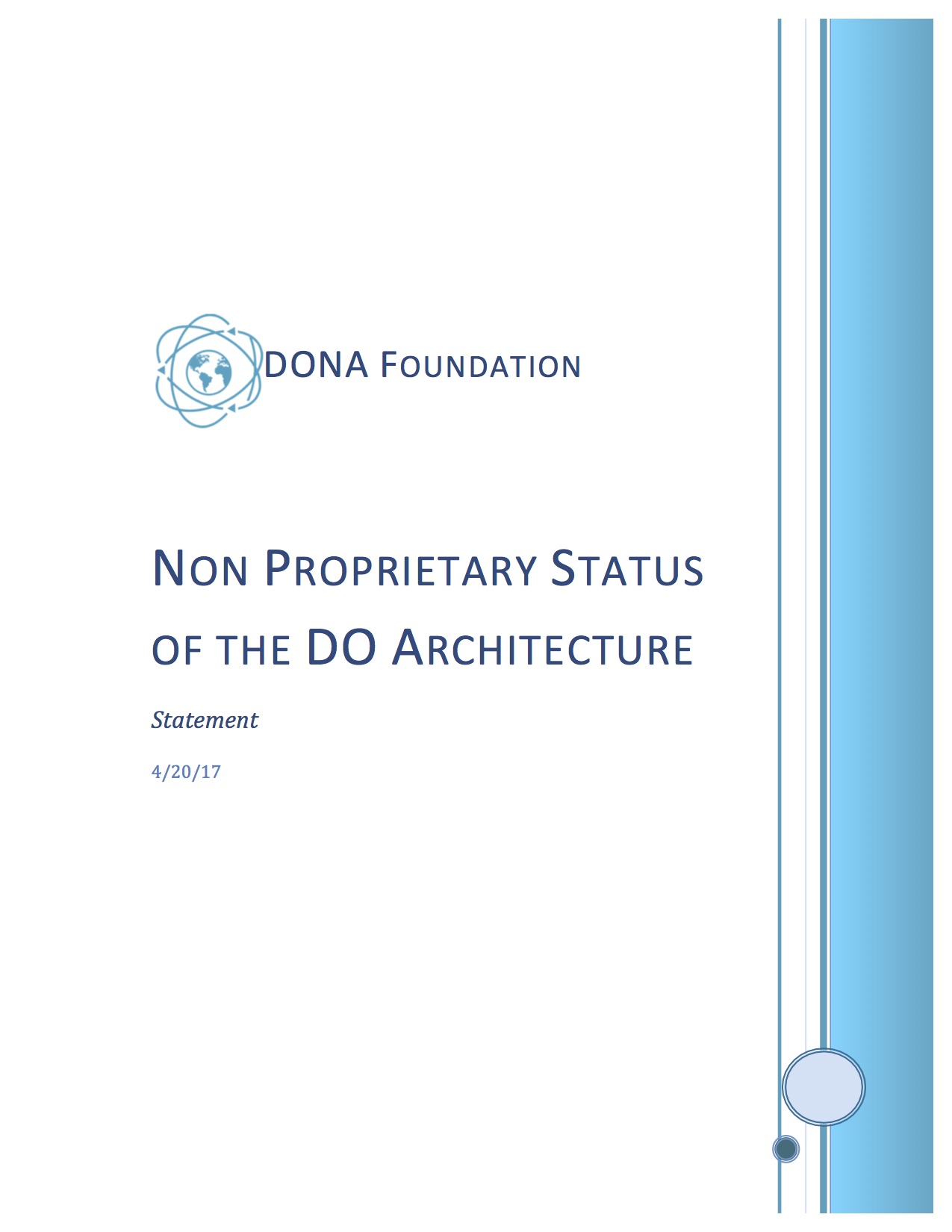 Non Proprietary Status of the DO Architecture

The DONA Foundation (“Foundation”) is aware of assertions made by several parties that the Digital Object Architecture (“DOA” or “DO Architecture”) is proprietary. These assertions are untrue. In late 2016, CNRI also posted a statement about this subject. The responsibility for evolving the DOA was transferred to DONA in 2014 by CNRI, the organization that developed it in the first place. 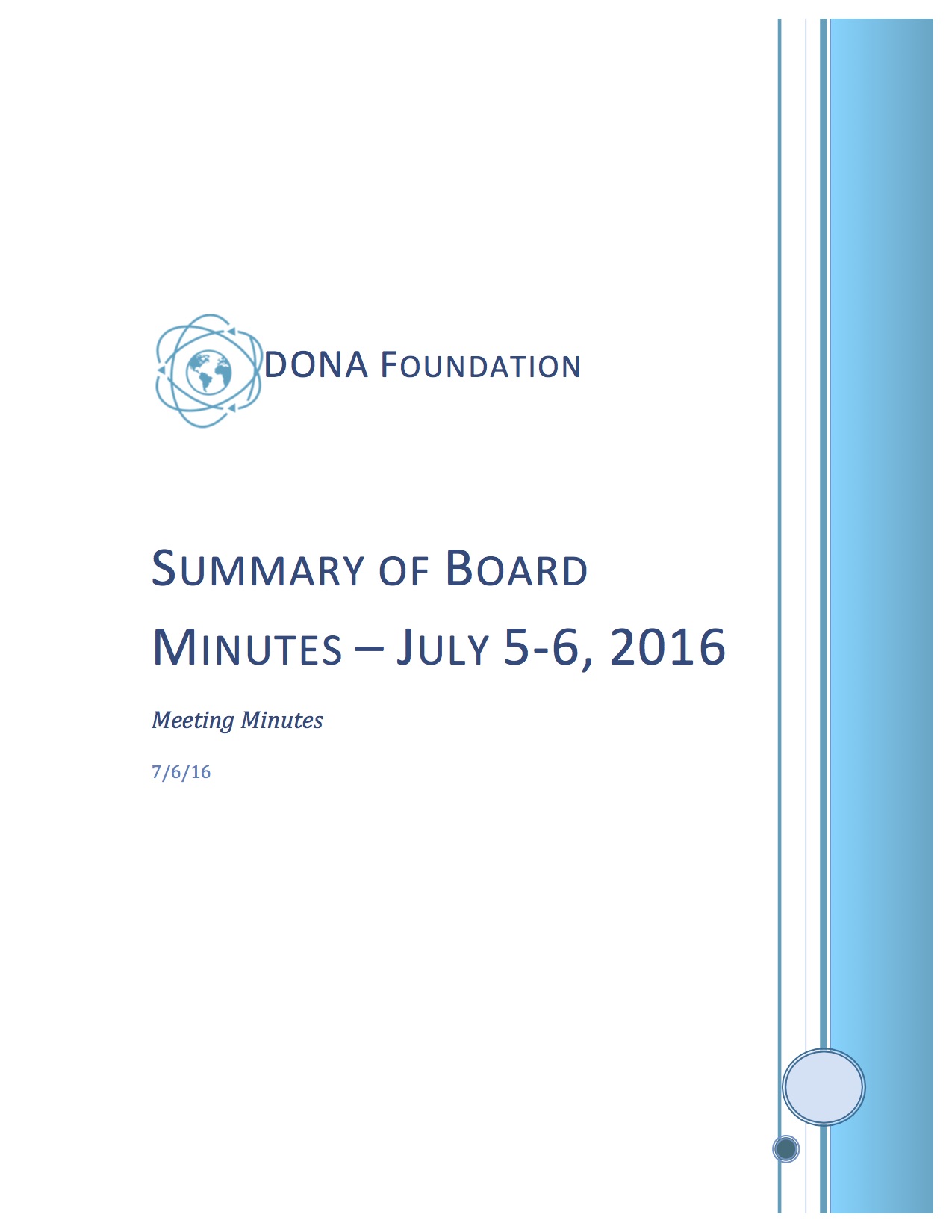 Also present were: Alexander Ntoko, representing ITU; Patrice Lyons, representing CNRI. The DONA Foundation’s Executive Director, Christophe Blanchi. In addition, several invited guests were present at most of the meeting at the invitation of Dr. Kahn. 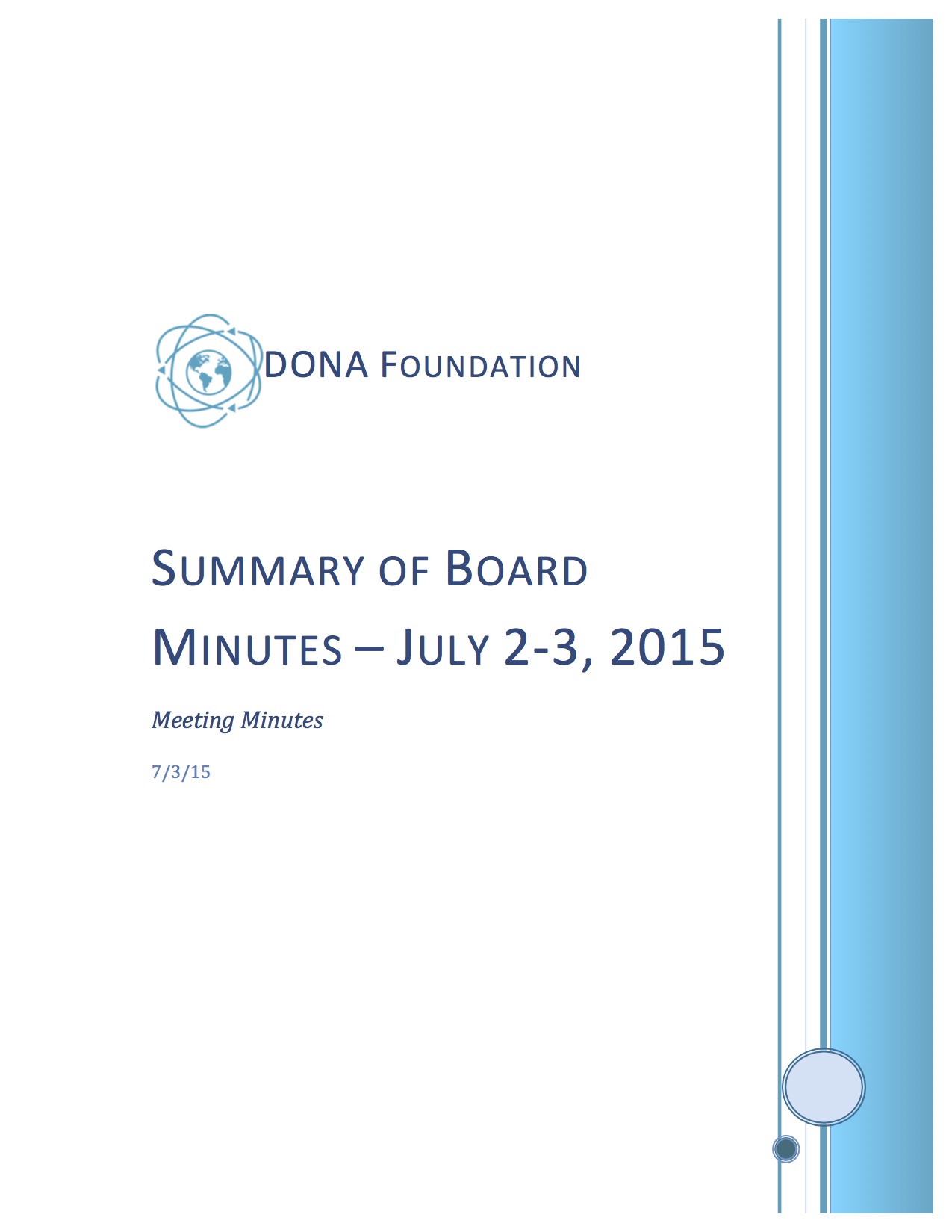 Institutional Observers: Alexander Ntoko, representing ITU; and Patrice Lyons, representing CNRI. The DONA Executive Director, Christophe Blanchi. In addition, several invited guests were present at most of the meeting at the invitation of Dr. Kahn. 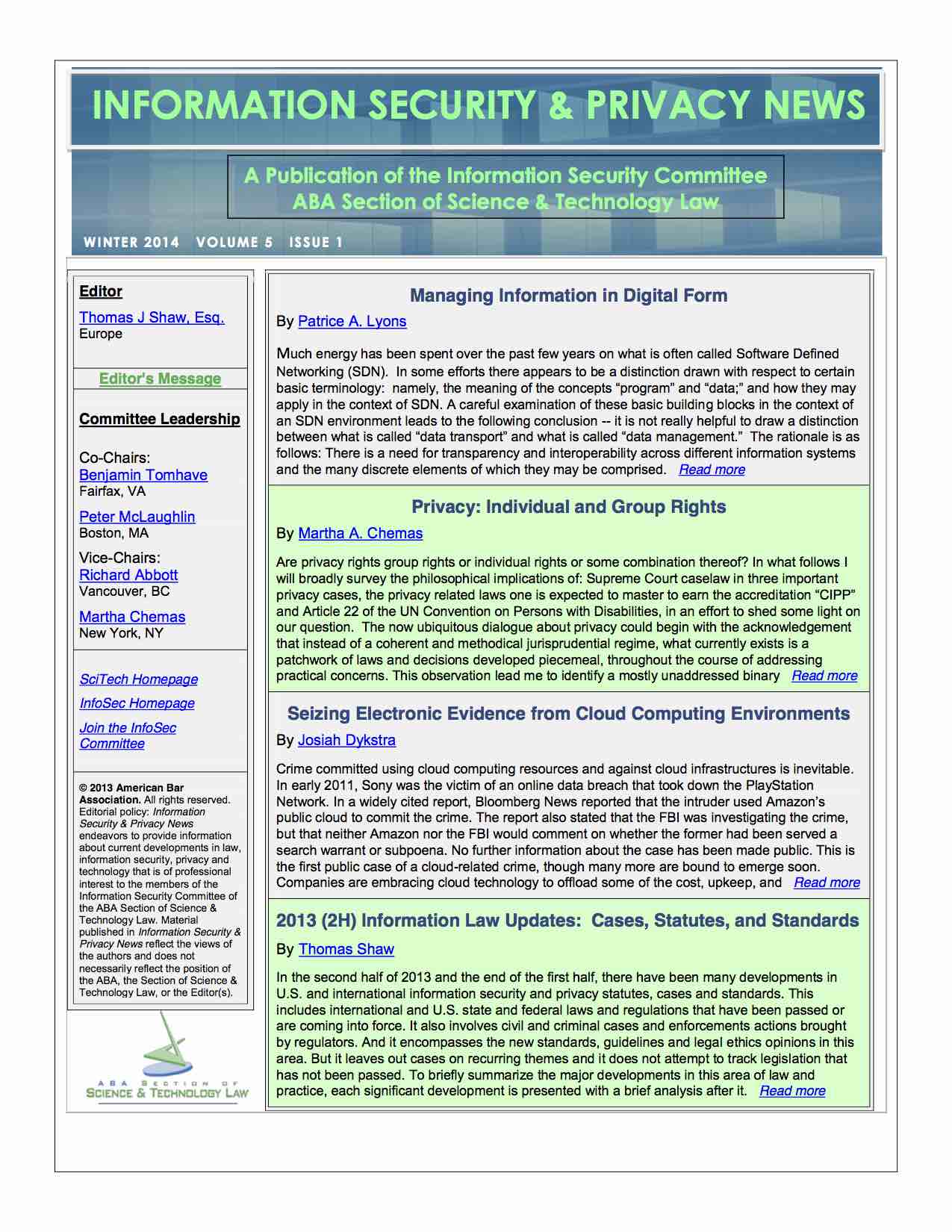 Much energy has been spent over the past few years on what is often called Software Defined Networking (SDN). In some efforts there appears to be a distinction drawn with respect to certain basic terminology: namely, the meaning of the concepts “program” and “data;” and how they may apply in the context of SDN. 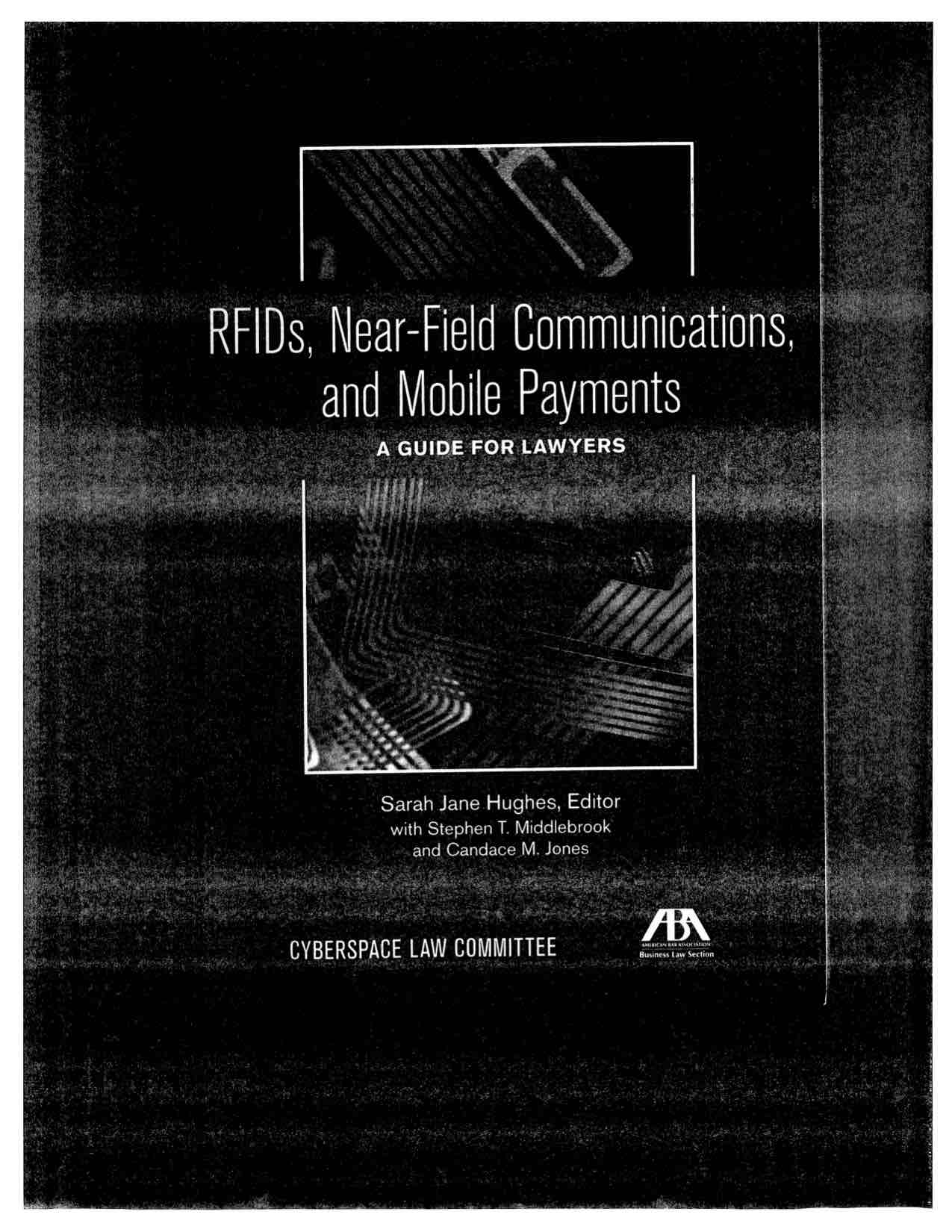 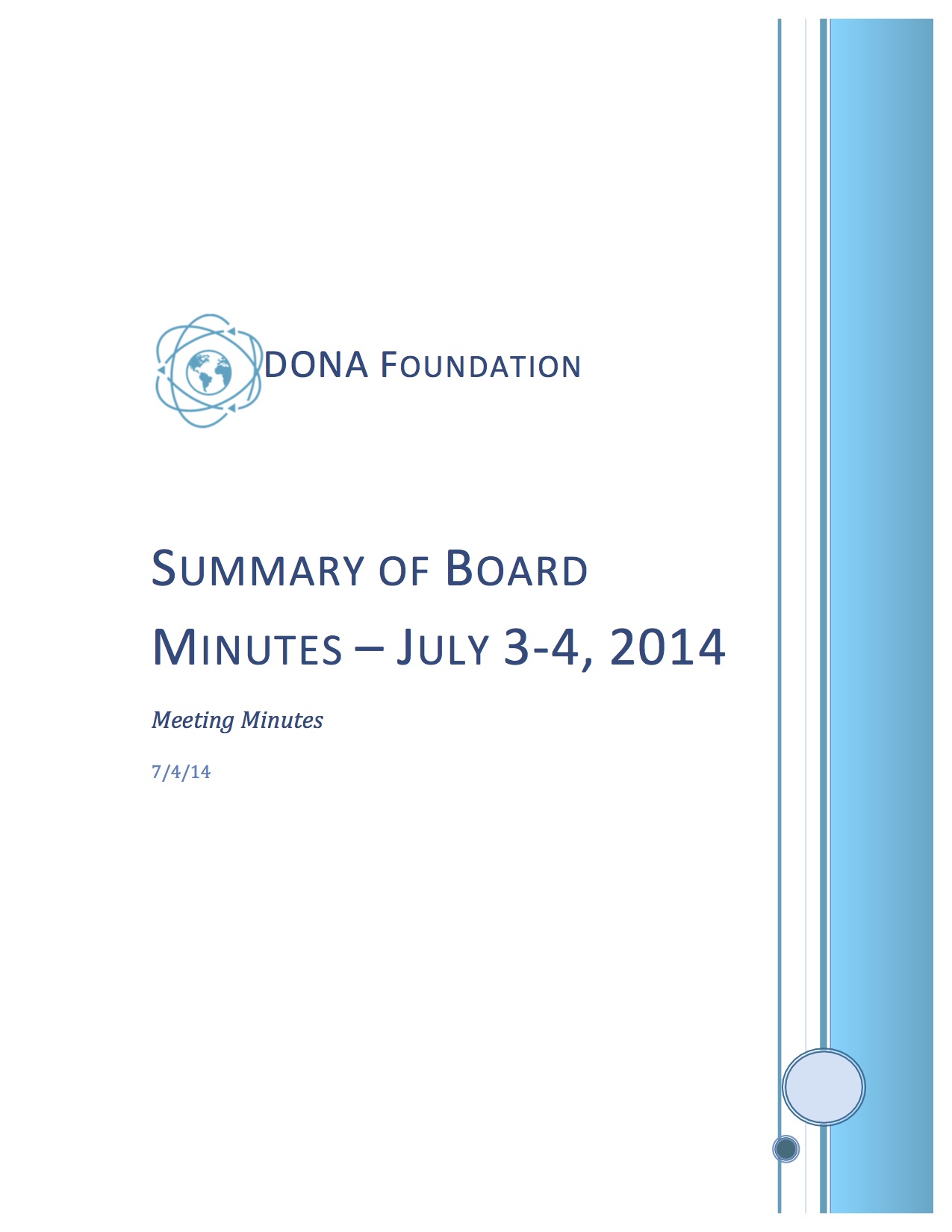 Present at the meeting were Robert E. Kahn (Chair), Stefan Eberhard (Secretary), Xinmin Gao, Antoine Geissbühler, Norman Paskin, Adama Samassékou, Peter Wittenburg and Stephen Wolff, being all the members of the Board of Directors; and (for portions of the meeting) Patrice A. Lyons, Christophe Blanchi and Sam Sun representing CNRI, and Alexander Ntoko, Preetam Maloor and JeoungHee Kim representing ITU. In addition, several invited guests were present for most of the meeting at the invitation of Dr. Kahn. 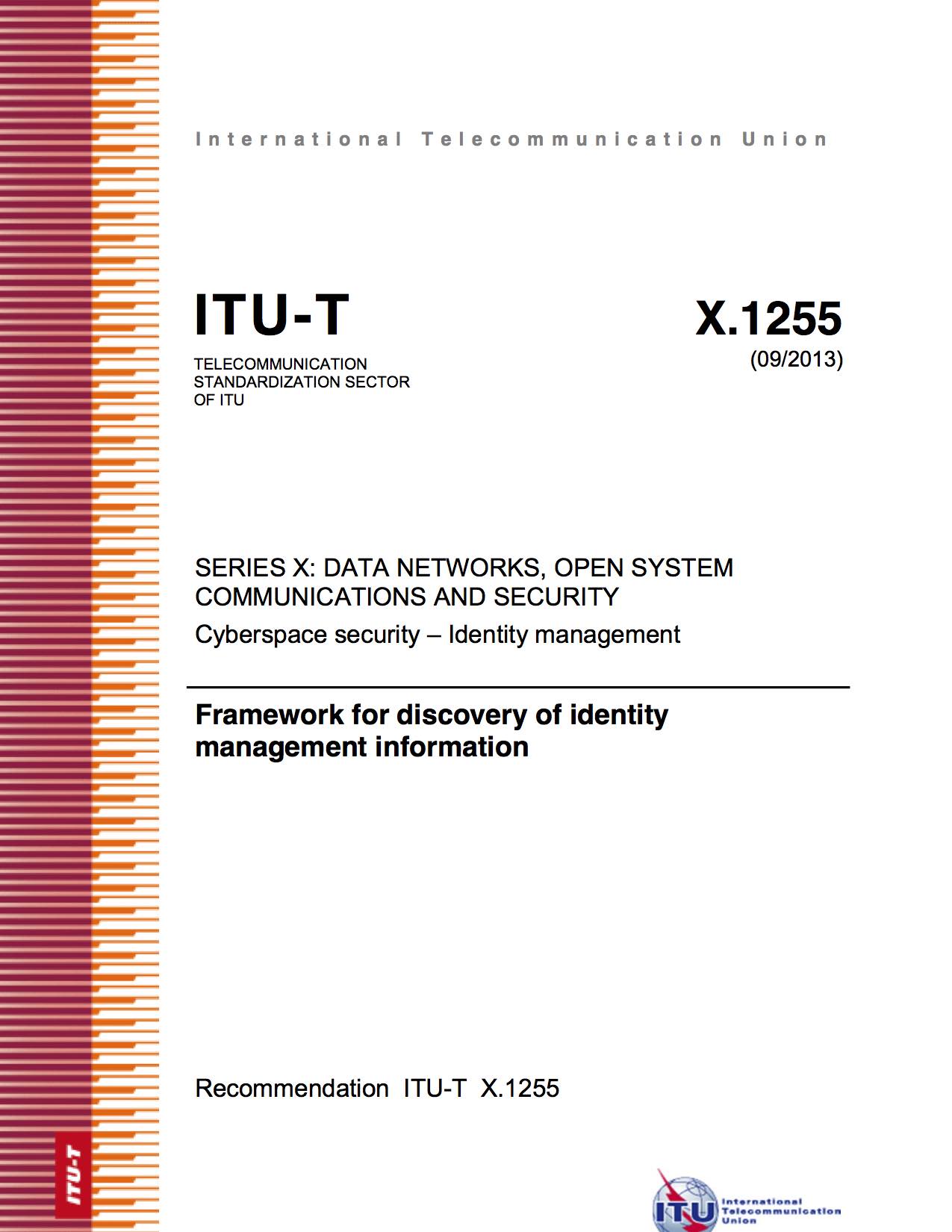 The purpose of Recommendation ITU-T X.1255 is to provide an open architecture framework in which identity management information can be discovered. This IdM information will necessarily be represented in different ways and supported by various trust frameworks or other IdM systems using different metadata schemas. This framework will enable, for example, entities operating within the context of one IdM system to have identifiers from other IdM systems accurately resolved. 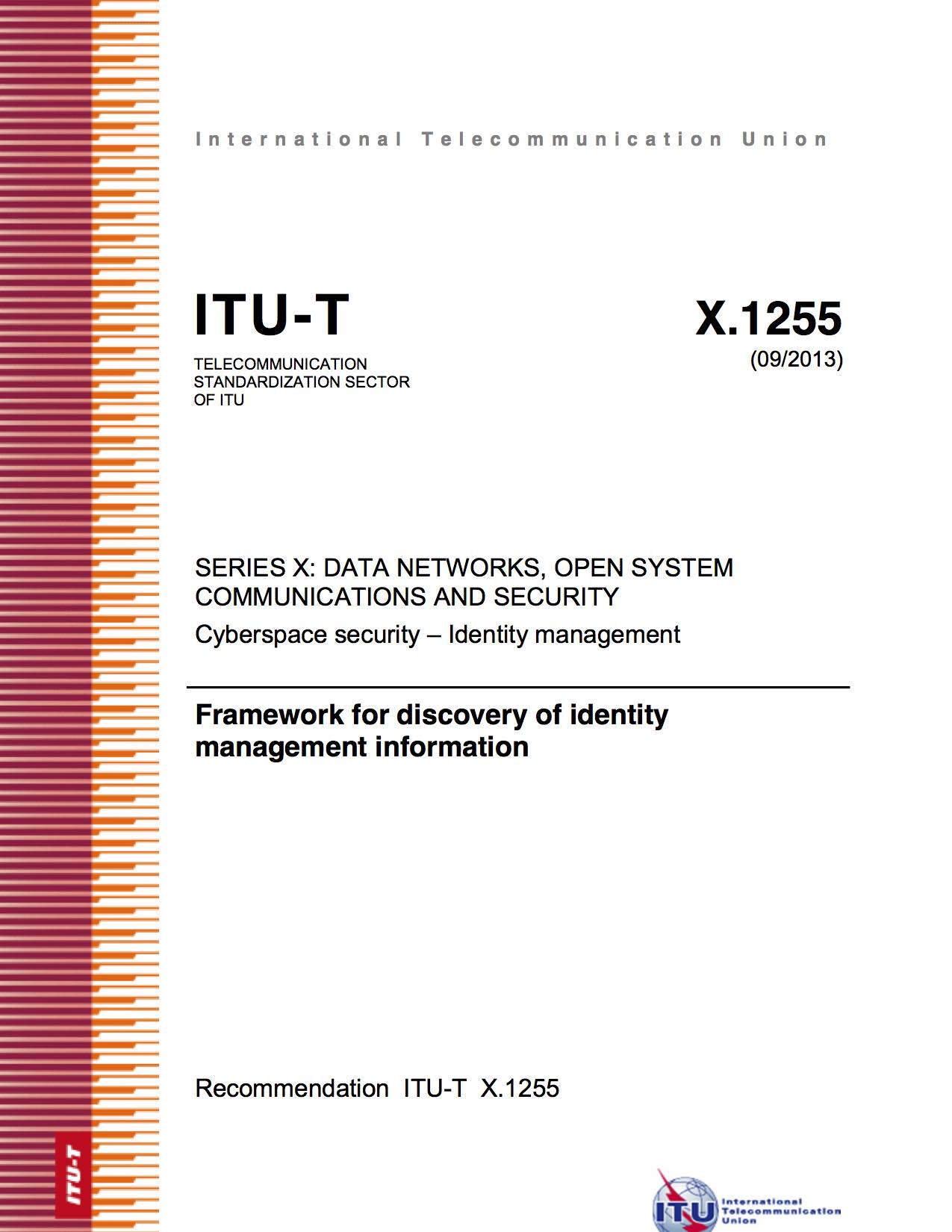 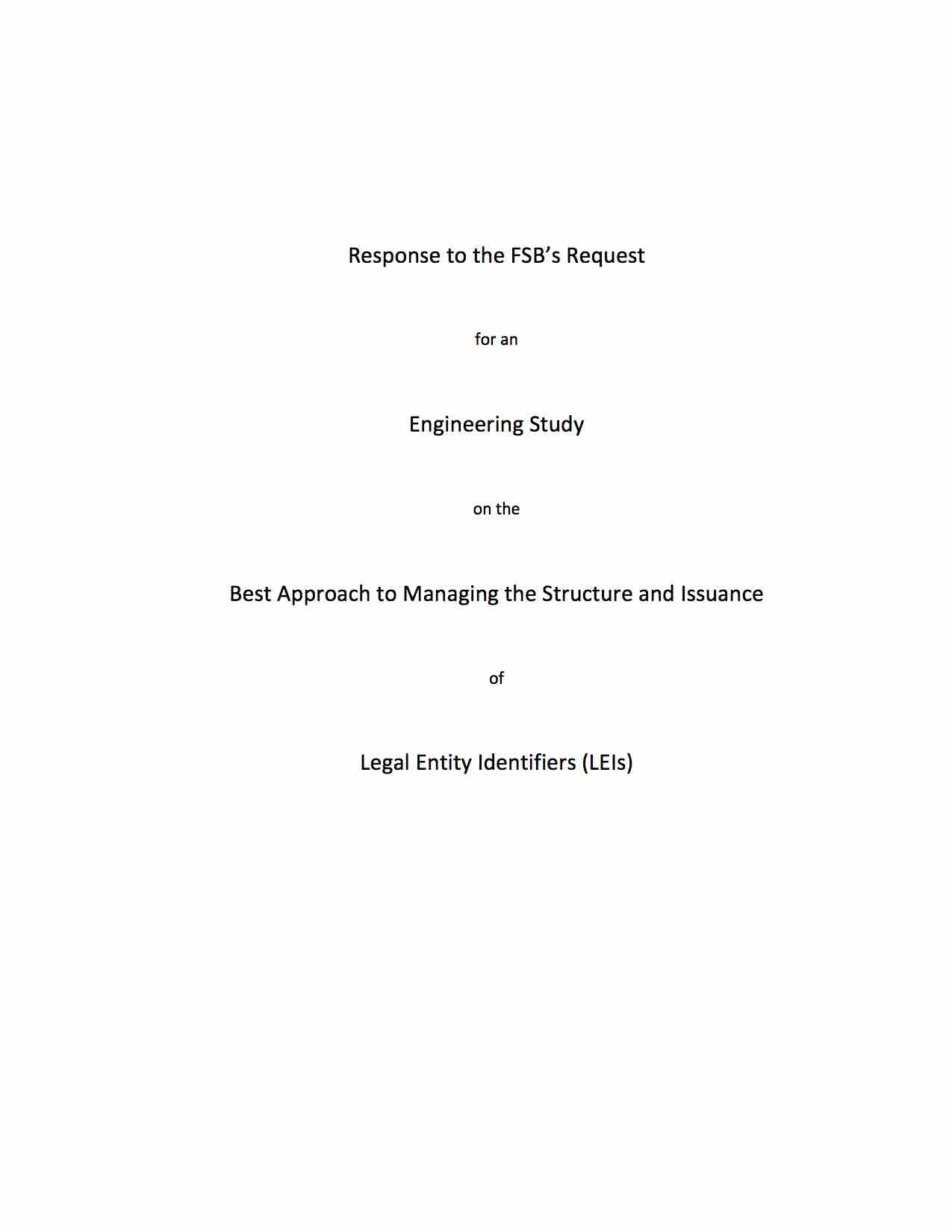 This paper is a joint response on the part of the authors to a request from the G-20 Financial Stability Board (FSB) for an engineering study to determine which scheme for the management of ISO 17442-compliant Legal Entity Identifiers (LEIs) best serves the purposes of the global LEI system that is being developed under the auspices of the G-20 FSB with the active contributions and participation of the Private Sector Preparatory Group (PSPG). 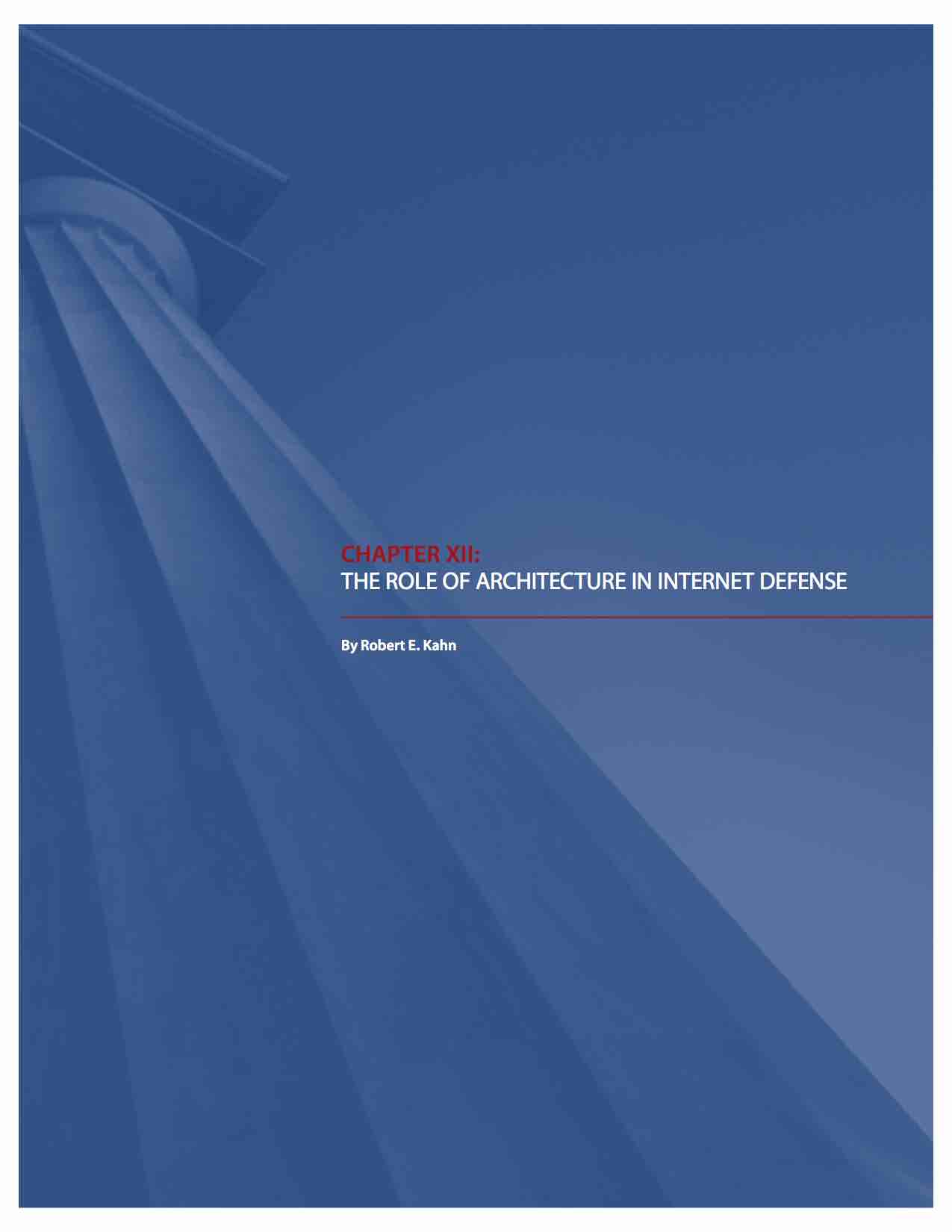 The Role of Architecture in Internet Defense

Since it was first introduced in the early 1970s, the Internet has met the growing needs of an everwidening community of users with great benefits to individuals, organizations, governments and their associated disciplines. Yet, along with that growth and evolution has come an increasing downside, namely traffic that intrudes and may disrupt productive uses of the Internet. Worse yet, concerns exist that such unwanted and unwarranted intrusions may cause more extensive damage in the future.

The Profession of IT: the Long Quest for Universal Information Access

Digital object repositories are on the cusp of resolving the long-standing problem of universal information access in the Internet. 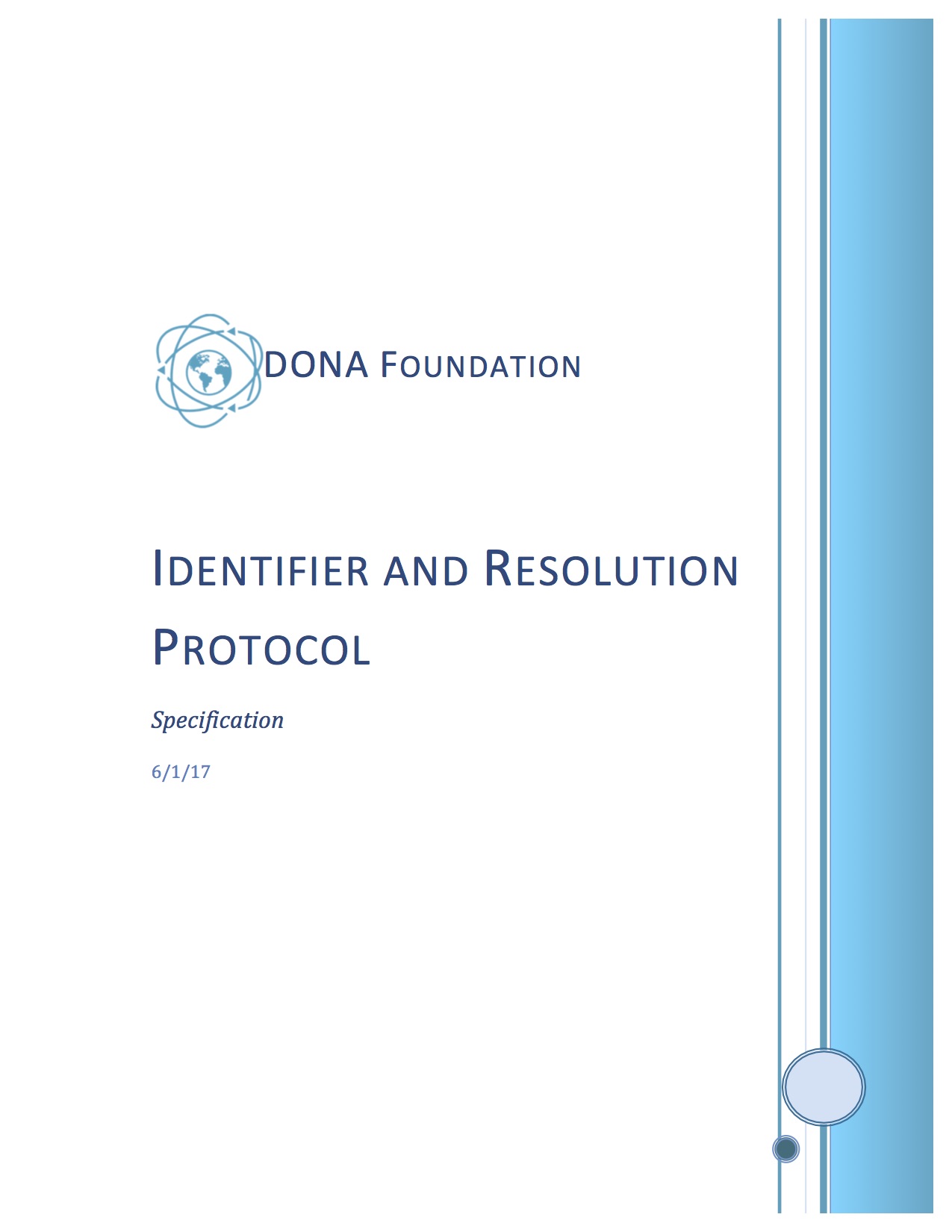 The Digital Object Interface Protocol (DOIP) is a simple, but powerful conceptual protocol for software applications (“clients”) to interact with “services” which could be either the digital objects or the information systems that manage those digital objects. 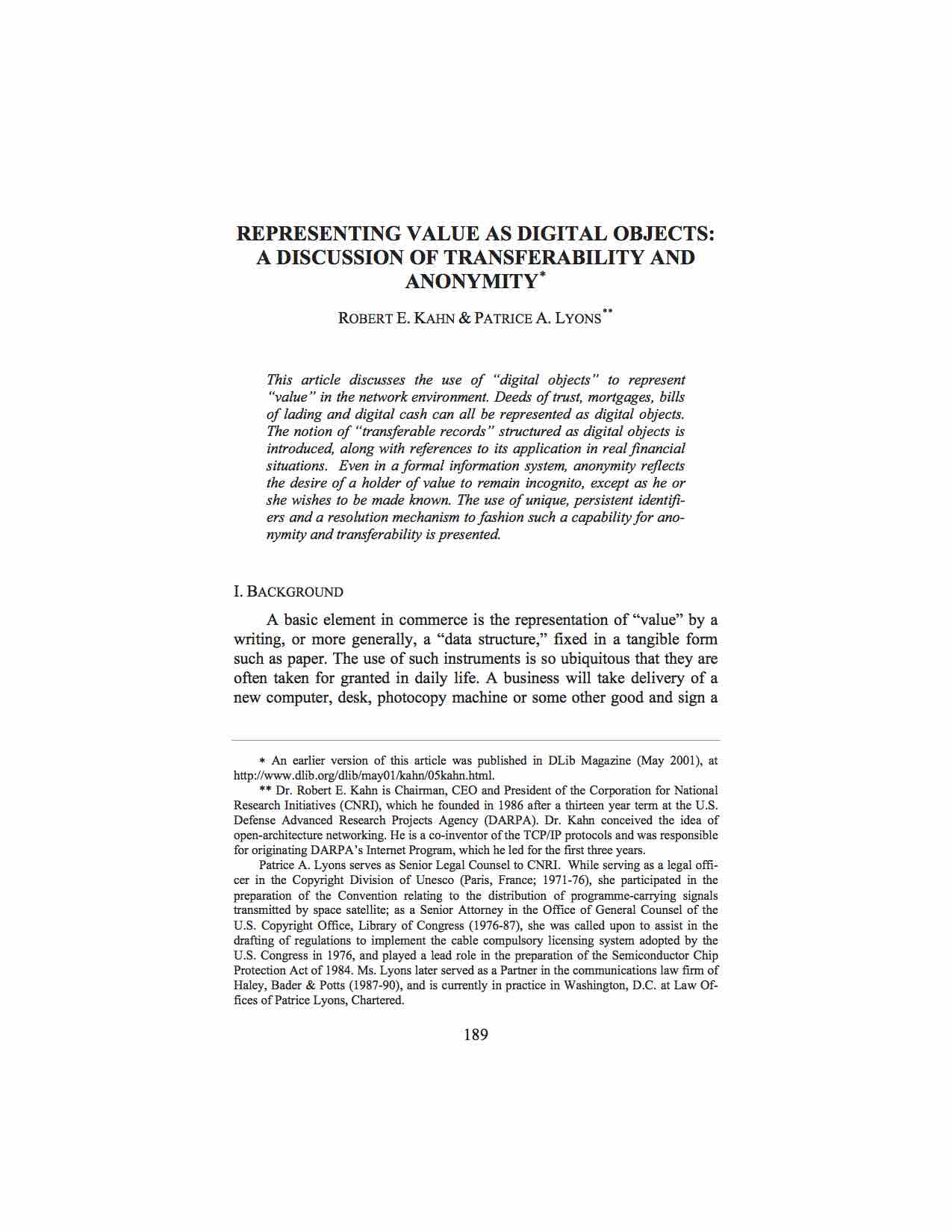 This article discusses the use of “digital objects” to represent “value” in the network environment. Deeds of trust, mortgages, bills of lading and digital cash can all be represented as digital objects. The notion of “transferable records” structured as digital objects is introduced, along with references to its application in real financial situations. Even in a formal information system, anonymity reflects the desire of a holder of value to remain incognito, except as he or she wishes to be made known. 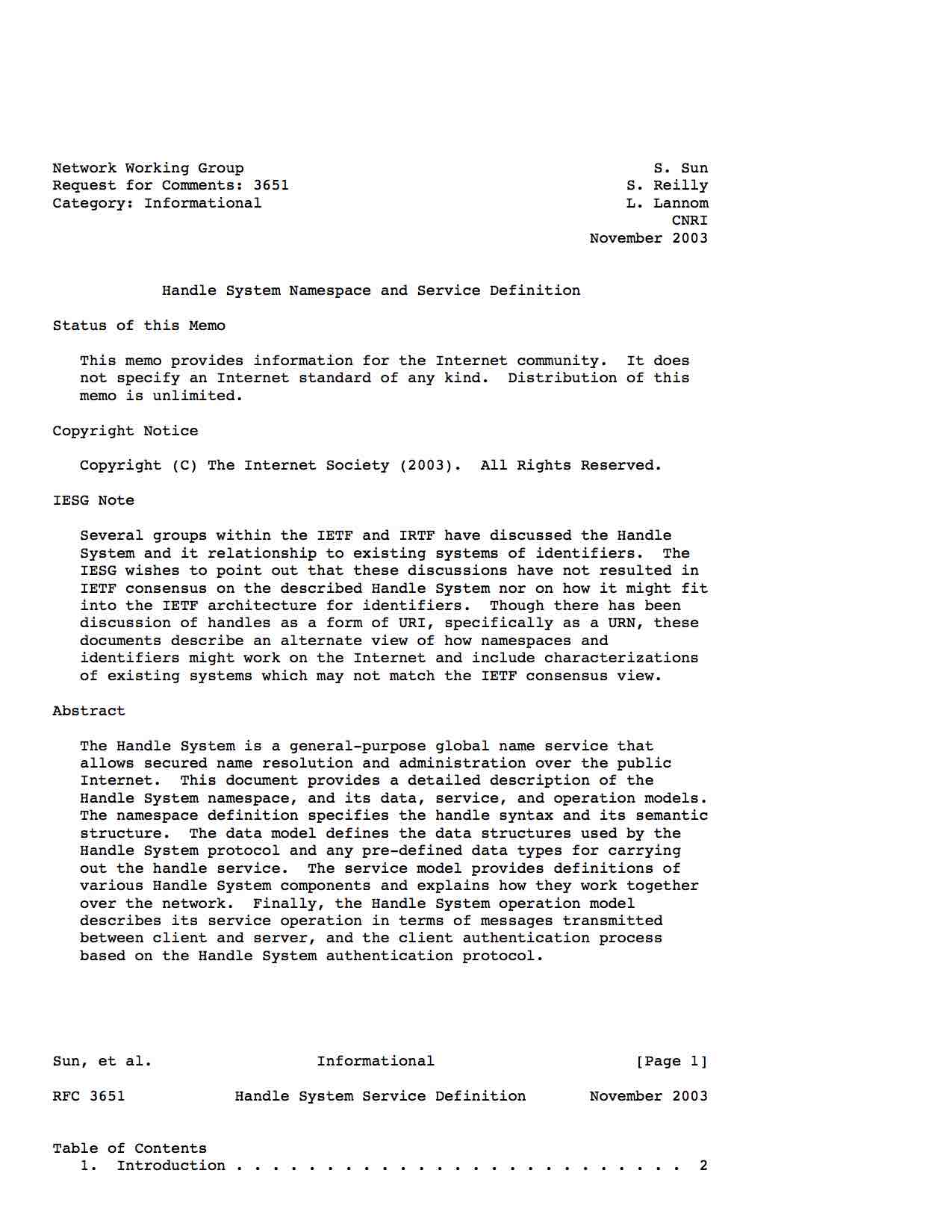 The Handle System is a general-purpose global name service that allows secured name resolution and administration over the public Internet. This document provides a detailed description of the Handle System namespace, and its data, service, and operation models. 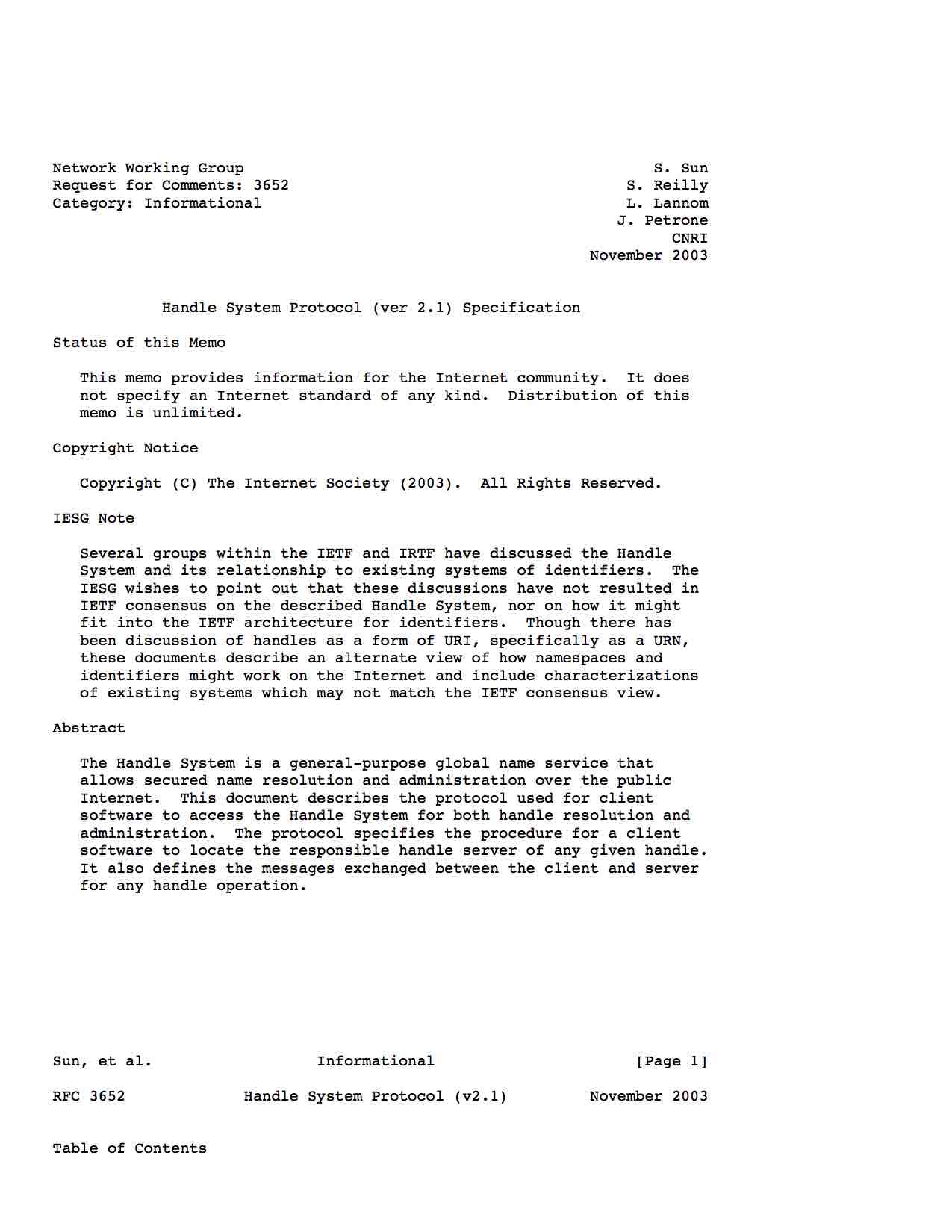 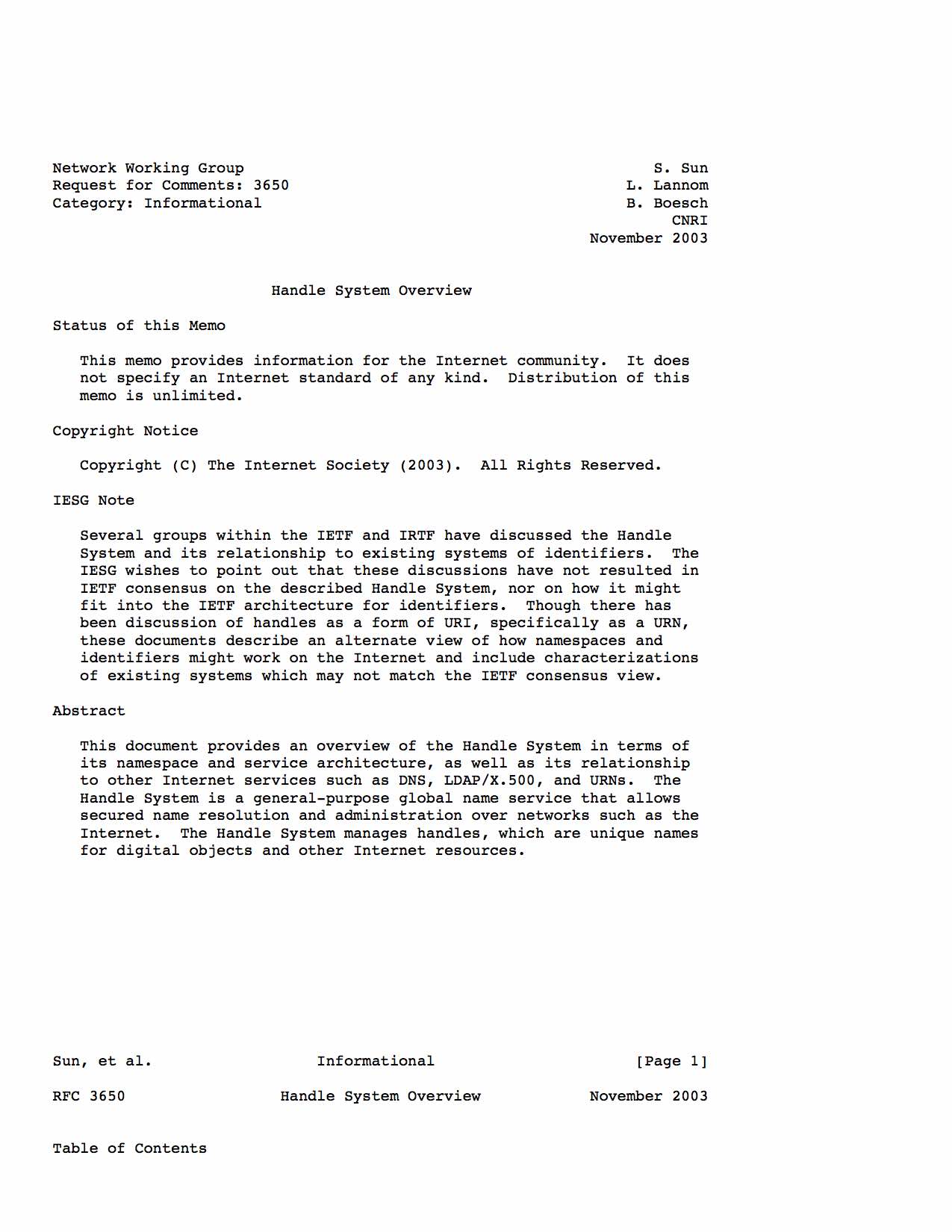 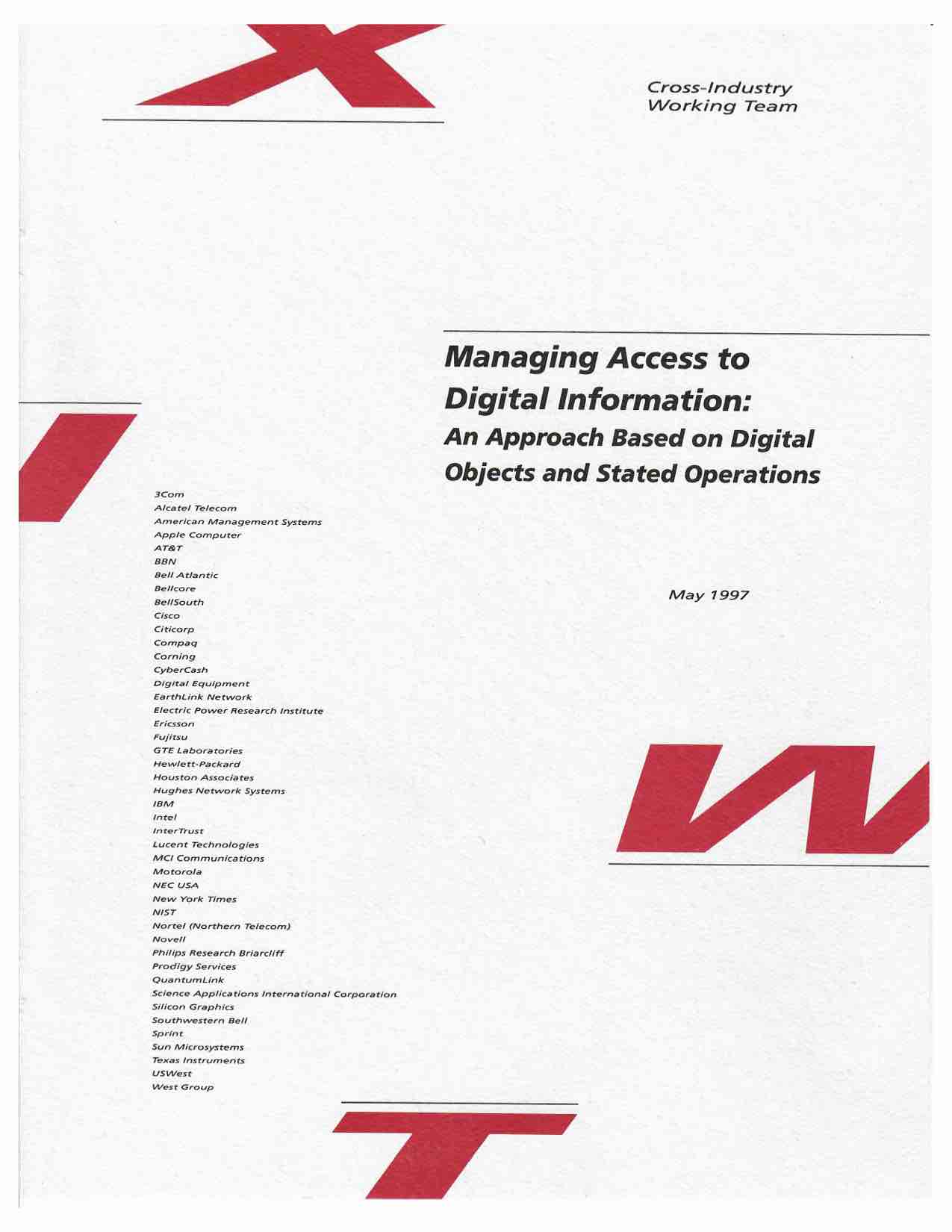 The deployment and widespread use of global information systems like the Internet may dramatically reduce the production and distribution costs usually associated with information dissemination. With digital technology, anyone can become an information provider, able to generate and distribute ideas at little or no cost. This technology facilitates dynamic and efficient forms of creativity or innovation, such as the integration of various digital materials to manifest sounds, images, graphics, or industrial designs – all linked in interesting, innovative, or entertaining ways. 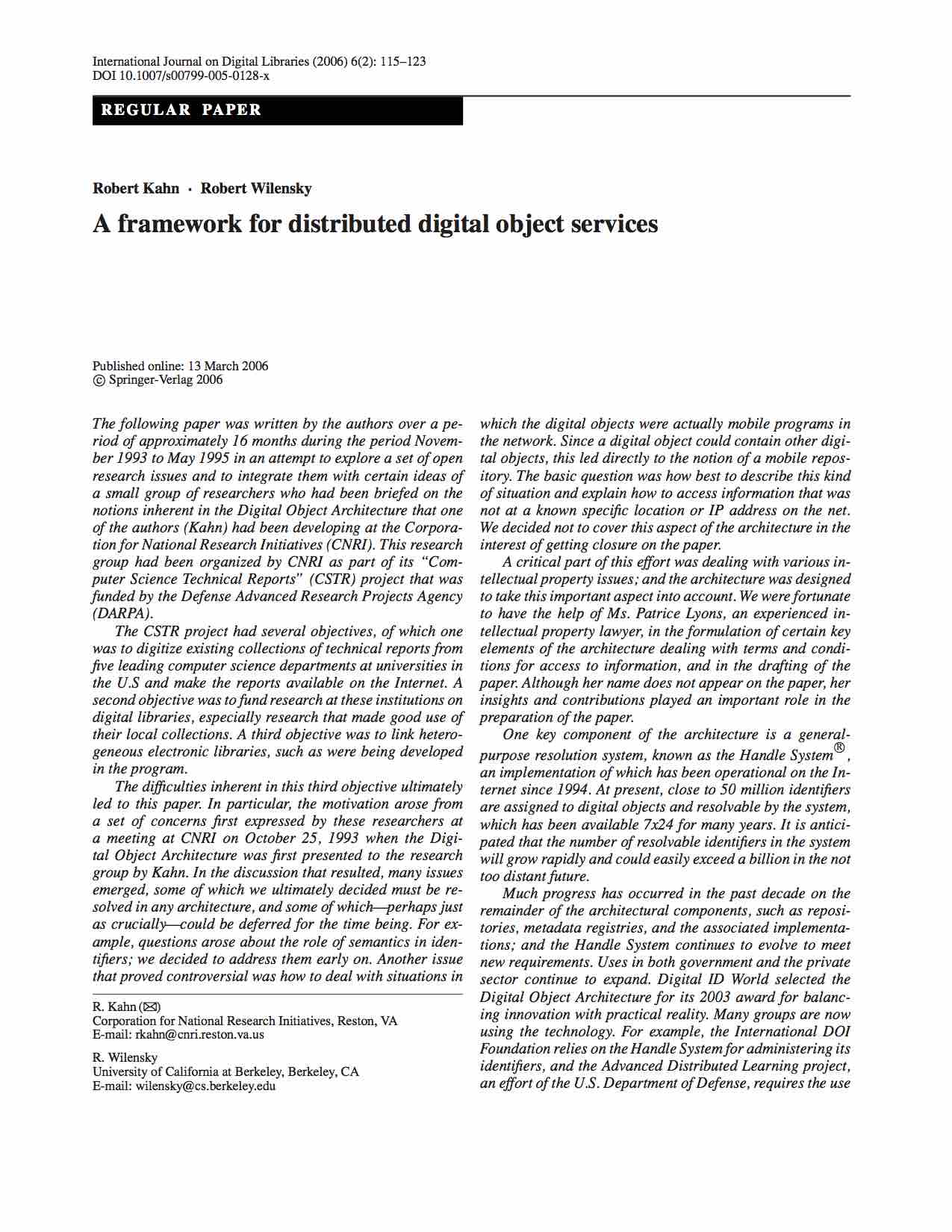 The following paper was written by the authors over a period of approximately 16 months during the period November 1993 to May 1995 in an attempt to explore a set of open research issues and to integrate them with certain ideas of a small group of researchers who had been briefed on the notions inherent in the Digital Object Architecture that one of the authors (Kahn) had been developing at the Corporation for National Research Initiatives (CNRI). 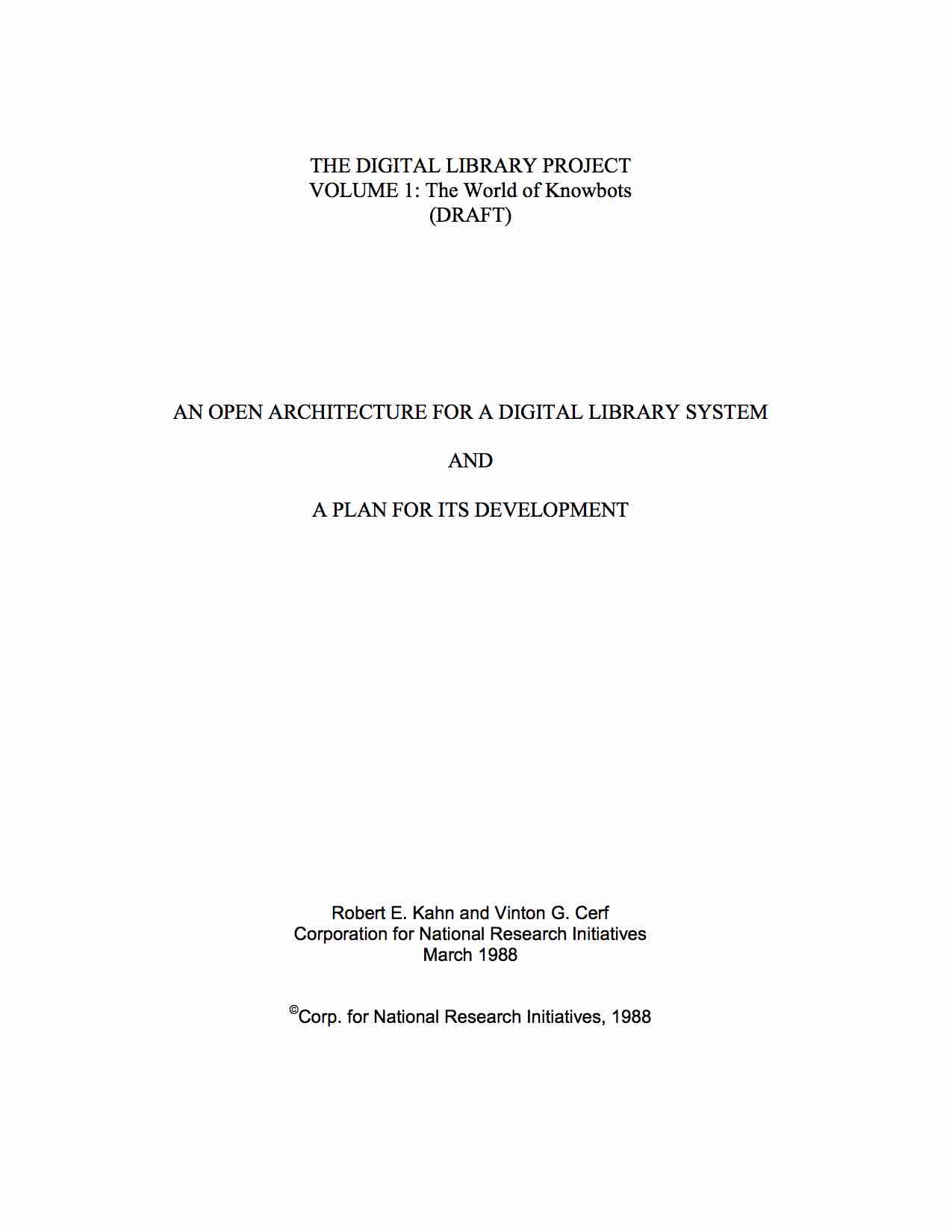 This volume describes an open architecture for an important new kind of national information infrastructure which we call the Digital Library System (DLS). The architectural framework includes the DLS functional components, the methodology by which the participating systems communicate with each other, and active, mobile software components, called Knowbots, which perform services for the users. Subsequent volumes will address detailed technical aspects of the architecture such as the design of Knowbots and the protocols required to bind the DLS components together. 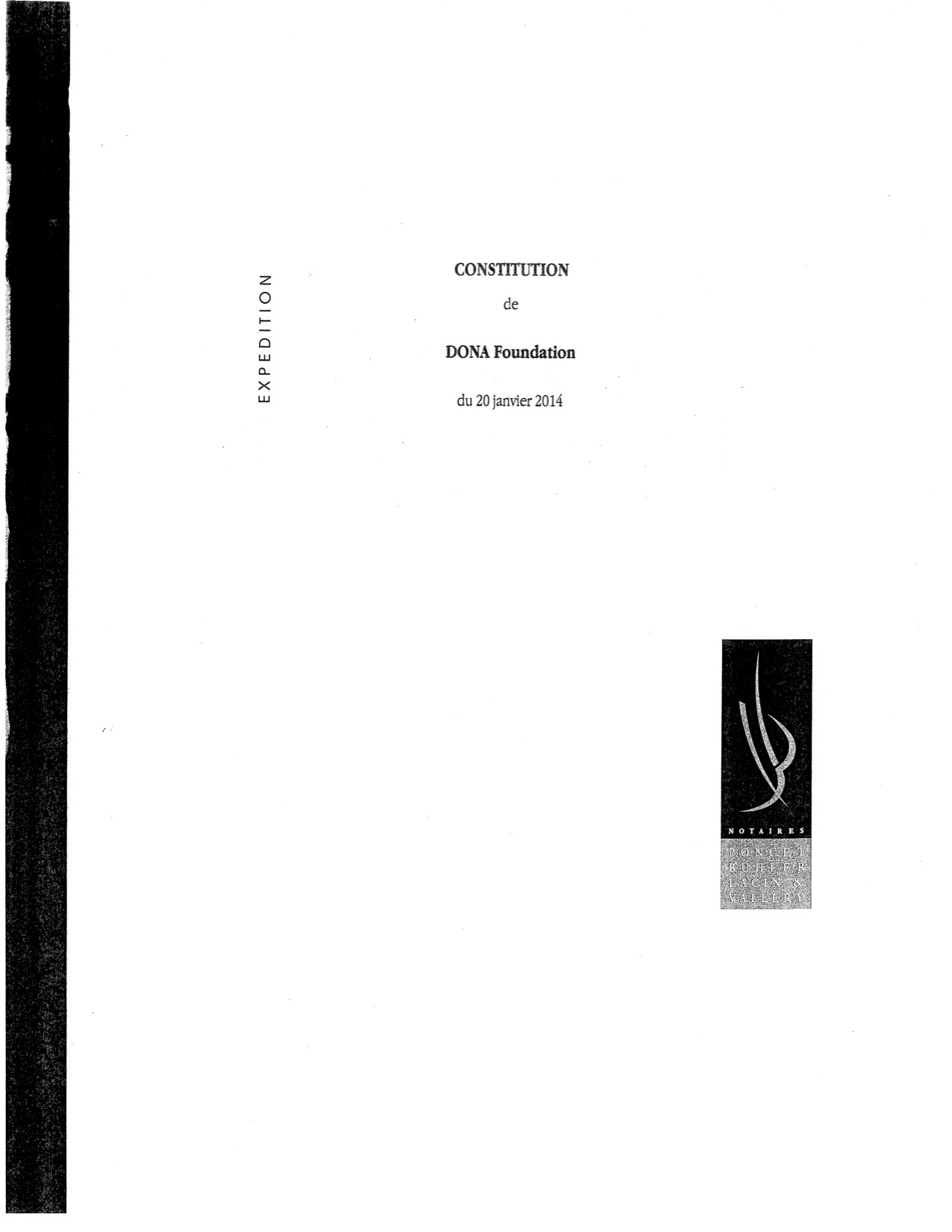 In the YEAR TWO THOUSAND FOURTEEN, on January 20.

IN GENEVA, at Rue Pedro-Meylan 5

Before Me David Lacin, public notary in Geneva

Acting in the case at hand for the account of 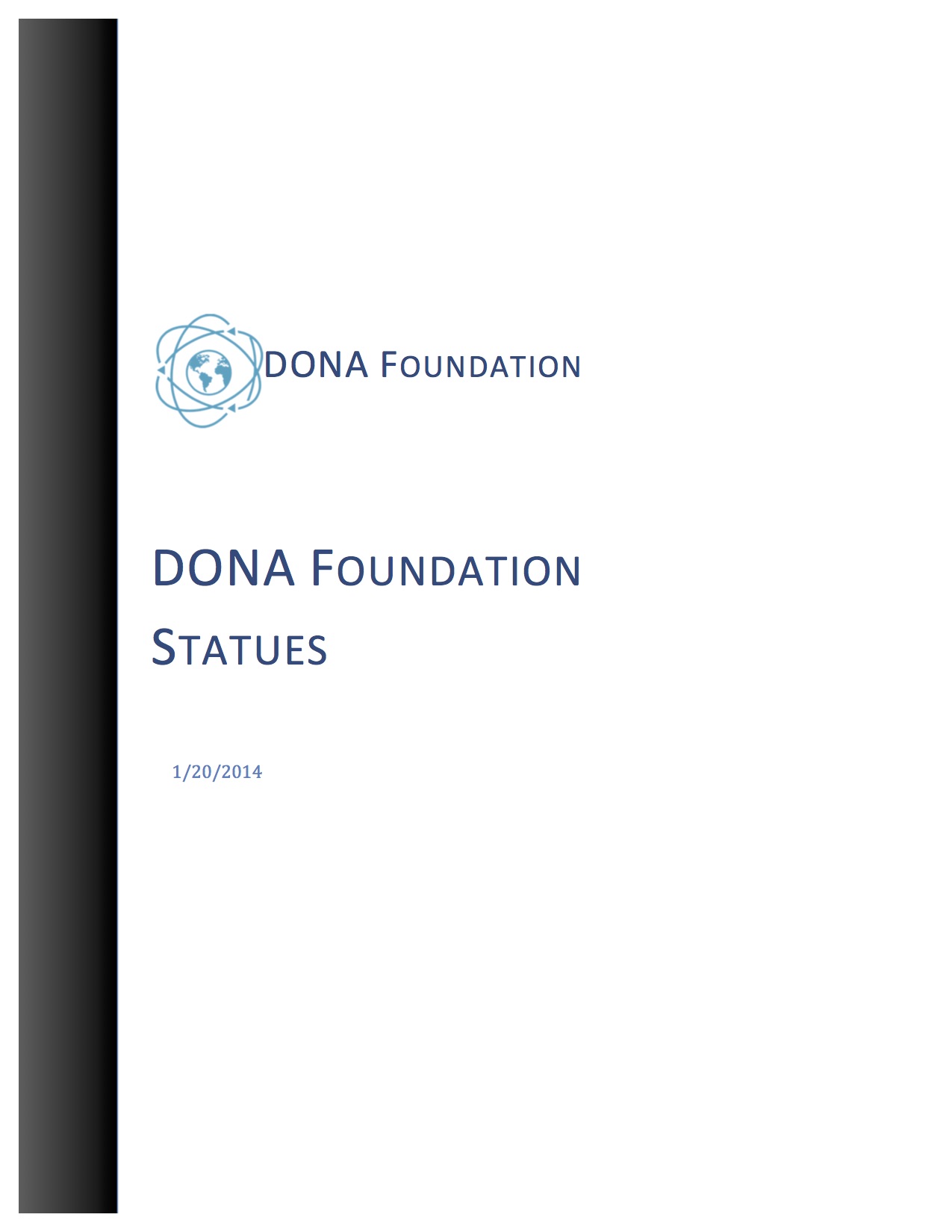 Name, Seat, Purpose and Capital of the Foundation

There exists under the name "DONA Foundation" ("Fondation DONA") (the "Foundation) an independent non-profit foundation within the meaning of Articles 80 et seq of the Swiss Civil Code ("CC).

The Foundation is registered with the Register of Commerce of the Canton of Geneva and placed under the supervision of the Swiss Supervisory Board for Foundations (the "Supervisory Authority").

The seat of the foundation is Geneva, Switzerland. 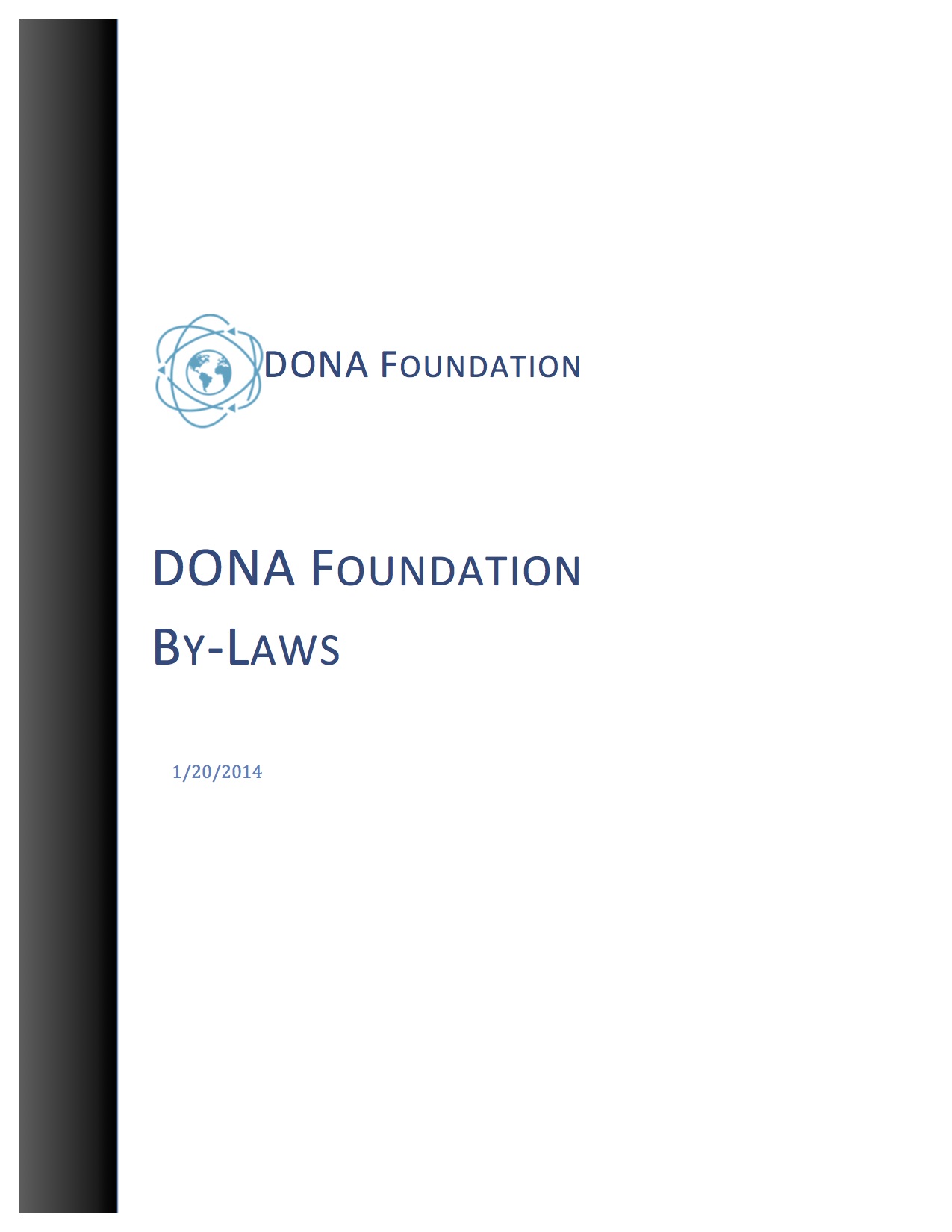 The present By-Laws (the "By-Laws") were adopted by the Board of the DONA Foundation (the "Foundation") according to the Article 7.2 of the Statues of the Foundation (the "Statutes"). Unless otherwise defined, these By-Laws adopt the definitions contained in the Statues.